Italy – Twinning between ADMAs of Spain and Turin
Featured 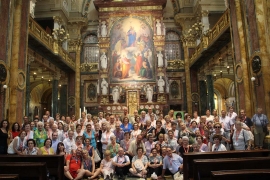 (ANS - Turin) – From July 3 to 8, to celebrate the 150th anniversary of the founding of the Association of Mary Help of Christians (ADMA), about 120 members of the Association and other members of the Salesian Family of Spain made a pilgrimage to the Salesian Sites. Led by Fr Juan Carlos Peréz Godoy, Salesian Provincial of Madrid, by Sr. Isabel Pérez, Vicar and Delegate for the Salesian Family of the FMA of Spain, and by several other SDB and FMA spiritual animators, the pilgrims visited Valdocco, Chieri, Colle Don Bosco and Mornese.

In particular, on Friday 5 July, they shared a charismatic and formative day with the ADMA Primary of Turin Valdocco, taking advantage of the accompaniment and animation of Fr Pierluigi Cameroni, world spiritual animator of ADMA, who presented them with the Association's origins and history. On the same occasion, a much-participated meeting was also held with members of the Primary ADMA Council and its President, Renato Valera.

Subsequently, through a video, the history and diffusion of the ADMA of Spain was told along with several especially significant moments in the life of the groups. In this way it became clear how this second group of the Salesian Family in Spain can boast of a rich history of faith and popular religiosity with numerous presences in all regions of the country.

ADMA Turin, for its part, illustrated their path of renewal underway, especially their experience with families, young people and seniors.

The Eucharist was then celebrated in the Basilica of Mary Help of Christians, in Castilian and Italian, presided by Fr Cameroni and concelebrated by the Salesians present. Finally, to seal the twinning, and in memory of the 150th anniversary and the pilgrimage to Valdocco, there was also a significant exchange of gifts, followed by a moment of celebration and a joyful and fraternal evening in what as a spirit of family.

"This pilgrimage to Salesian Places was a call to transmit what was experienced in the groups to which they belonged, to continue the journey of faith inspired by Salesian charism, renewing the mission to go towards the young and towards the weakest and most vulnerable, preceded and guided by Mary Help of Christians," commented Fr Cameroni.