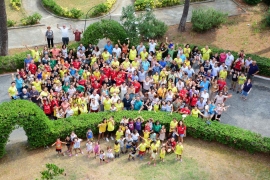 (ANS - Cetraro) - The fifteenth edition of the “Family Animators Formation School” (SFAF), organized by the Cerchi D’Onda Onlus association, ended on Sunday 25 August. Over 270 people - families with children, consecrated men and women, priests - took part in the one-week formation course with teachers and formators. Held in Cetraro, province of Cosenza, in the Colonia San Benedetto, it was a week in which the family was the absolute protagonist.

The spiritual accompaniment of the families, who met every morning for a moment of common reflection on the Pope's Encyclical "Gaudete et Exsultate", was led by Fr Mario Oscar Llanos, president of the Cerchi D'Onda Onlus Association and Dean of the Faculty of Educational Sciences at the Salesian Pontifical University, by Sr. Leslye Sandigo, Daughter of Mary Help of Christians and world delegate of the Association of Salesian Cooperators, and by Fr Simone Bruno, director of the San Paolo publishing group.

“Holiness is for everyone and every day in the family we experience 'the holiness of the next door neighbour, lived with simplicity: I like to see holiness in the patient people of God: in parents who raise their children with so much love, in men and in women who work to bring bread home, in the sick, in the elderly women who continue to smile.” These words of Pope Francis, contained in the Encyclical "Gaudete et Exsultate", were reflected at length during the Formation School. They thus focussed on caring for families, couples, their children, reminding them that they are the heart and the engine of society, a concrete testimony of the mission that each one has: to arrive at holiness.

The work had been prepared by the Governing Council, composed of Loredana Simeone and Ruggiero Diella, the main promoters and organizers of this Formation School since its conception, and Pier Marco Trulli, Alessandro Malatesta, Sabatina Stillavato, Domenico Langella, Marcella Greco, Fr Mario Llanos.

The animation of the participants' children was taken care of by the youth animation team. It featured a program of educational and recreational activities and workshops diversified according to the schedule and the program established for the group to which they belonged (from 0 to 19 years old). The team was coordinated by: Marco Diella, Benedetta Mancuso and M. Francesca Trulli. The team was formed for six months, led by Maria Raffaela Bagnati - psychologist and psychotherapist - and was guided during the SFAF by Sister Leslye Sandigo.