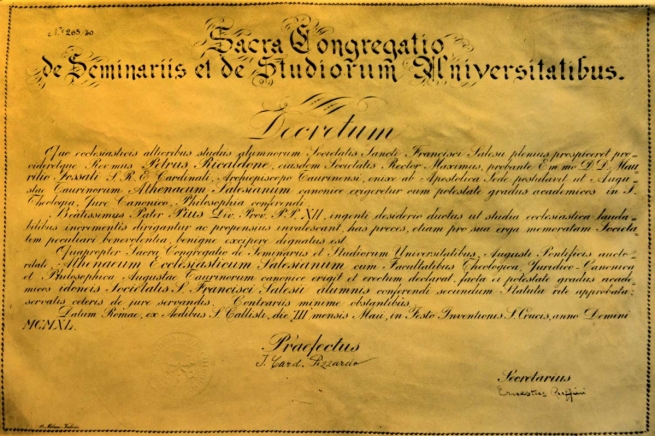 Between 1913 and 1914, the first Salesian Theological Studentates were established. In 1920, Blessed Filippo Rinaldi moved the Studentate to Turin.

On May 2, 1936, Fr Pietro Ricaldone decided to set up a Faculty of Theology managed by the Salesian Congregation. In 1936 he exposed this project to Pope Pius XI, who encouraged him.

On May 3, 1940, the Salesian Pontifical University was erected in Turin under the guidance of Fr Ricaldone, who was the first Grand Chancellor.

In September 1965 the University moved from Turin to Rome and the following year, in October 1966, Pope Paul VI presided over the official inauguration of the new Salesian Pontifical Athenaeum.

On May 24, 1973, with the Motu Proprio Magisterium vitae, the University was elevated to the rank of Pontifical University, organized around five Faculties: Theology, Educational Sciences, Philosophy, Canon Law and Christian and Classical Literature.

On January 31, 1981, on the anniversary of the feast day of St Giovanni Bosco, John Paul II visits the University.