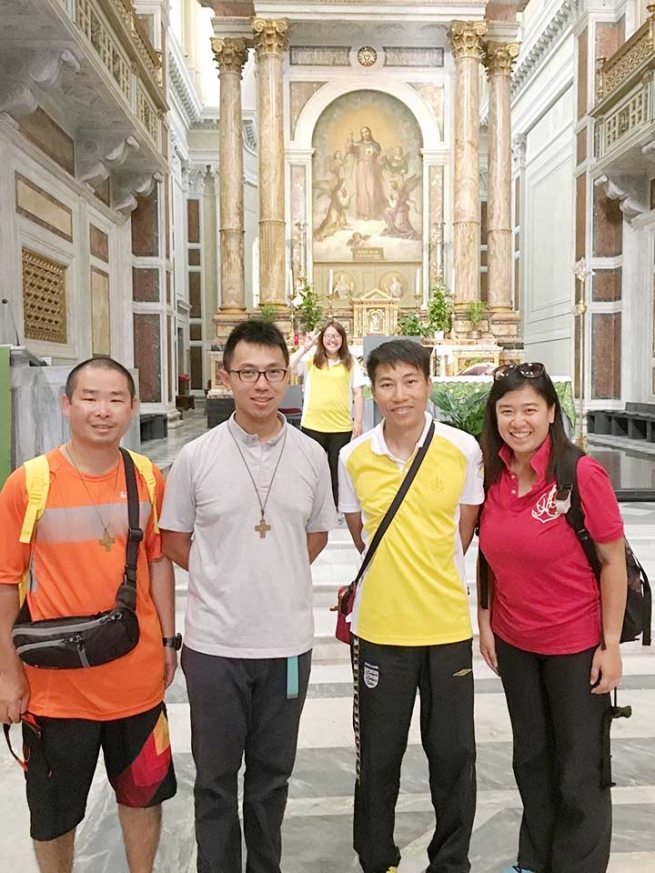 (ANS – Hong Kong) – Phyllis Tang is a Lay Mission Partners who has been working in the Salesian Youth Ministry in Hong Kong for almost 10 years. She joined the XXVIII General Chapter in Turin as invited observer in order to share her perspective on the shared mission of the Laity and of the Salesians of Don Bosco as well as on the Salesians for the young today.

Shared Mission Among the Salesians and the Laity

In Hong Kong we have different conferences for collaborators of different level, such as the quarterly Pastoral Meeting held three time a year for the school teachers and pastoral assistants to strengthen their spirituality and also the sense of belonging to the family through knowing more about the Strenna of the year and spiritual camps for the school principals for the same purpose. Through these workshops or conferences, the collaborators will be able to know more about the mission of Salesians of Don Bosco. I think we have a question that has never been solved is how to transform the collaborators to become lay mission partners and help them to realize they are not just working but at the same time sharing the mission of Don Bosco.

As Mama Margarita is the first lay mission partner of Don Bosco, their great mutual trust gave Mama Margarita certain responsibility that empowered her. My perspective is mainly from my own experiences and observations, Lay Mission Partners and Salesians of Don Bosco need to maintain mutual trust and a relationship imbued with humility so that the collaborators could have some space to think about the work load not just a job but as a mission. If most of the time, the Salesians of Don Bosco are acting like superior that lack of humanity or love, the lay will always be collaborators instead of becoming real lay mission partners. Of course good spiritual directors are very important for collaborators as well, so I do think that the Salesians need to maintain a co-worker relationship and the role as spiritual guide or mentor. Lay Missions Partners, like the youth, also need to see the love of God through the Salesians so they can pass it on to the youth.

What Kind of Salesians for the Youth of Today?

Having been working with the young for almost 10 years after graduating from University, I would say that I gradually understand how the preventive system works with the youth. The presence of the Salesians is very important. This presence means not only physically present among the young but also being involved with them, being with them at play and recreation, praying with them, etc. Nowadays the Salesians are so busy that most of their time are spent for office work. I think they do want to spend time with the young in the playground, but there are times when they are with the youth but are still worrying about other things. They will be texting or discussing various concerns with other. That’s not enough for the youth. They really need the Salesian to pay attention to them and feel that they are enjoying together with them.

The other thing that the youth eagerly want from the Salesians is to have immediate response when they are facing social issues. I think everyone knows that it has been a tough year especially for the youth in Hongkong. They go out to the streets, to protest, to ask the government to withdraw the extradition bill. But gradually, there were violent confrontations that erupted between police and protesters, there are radical protests but at the same time there are peaceful ones. In that period of time, physically, mentally and spiritually the youth were distressed, they don’t know how to face the current situation. What I could do at that time was to seek help from different priests and to flip over the Catechism of the Catholic Church to find out the answer for the young.

They want the Salesians to share their experience and feelings regarding certain social issues, and to explore those controversial actions based on the Catholic Teaching so they can use the value of the Church to distinguish the right and wrong. Whenever these social issues surface, the youth just can’t wait there for a month or two, because they got peers who don’t have religion, they may be radicals, at the time, they might been assimilated like them. I think it is important for the Salesians to enhance themselves and be aware of the modern issues. The world is changing so fast, the youth need to face a changing world and we also need to admit that the transmission of information is very fast that Salesians sometimes need to react faster to chase and to save the soul of the young before they are being lost.