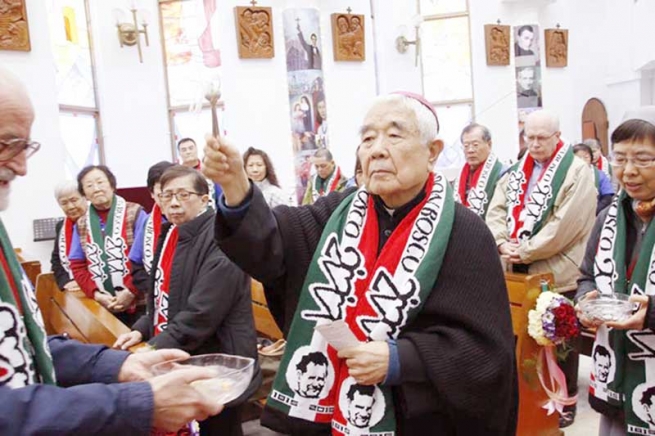 (ANS - Taipei) – A few days ago, on the occasion of the feast day of Mary Help of Christians, the archbishop emeritus of Taipei, the 92-year-old Msgr. Joseph Ti-Kang, Salesian Cooperator, answered some questions about his Salesian life and commitment from the Salesian missionary Fr Lanfranco Fedrigotti, former CIN Provincial, and currently stationed in Taipei.

What was your experience that attracted you to Saint John Bosco?

When I was in senior high school in mainland China, I read the life of Don Bosco entitled “A Great Man of the 19th Century” (a beautiful Chinese translation of Ruffillo Uguccioni’s Un grande italiano, by Fr. Andrew Wu An-de). I read it and I was forever attracted by Don Bosco. I told myself: “This man is the guide of my life”. Yes, throughout my life Don Bosco has been my spiritual guide. When I was sent to Rome for studies in the College of Propaganda Fide, as we entered, we were told: “During the first year think clearly whether you want to be a diocesan priest or a religious priest. If you decide to become a religious priest, then, after the first year, you must leave the Propaganda College and find another residence”. This proposition set me thinking about my priestly vocation: diocesan or religious? In the end I opted for the diocesan priestly vocation, because my diocese in China was in dire need of priests. However, I told myself: “Were I to choose to become a religious priest, my first choice would be the Congregation of Don Bosco, my second choice the Benedictines”. After finishing my studies in Rome, it became impossible to return to China. Consequently, I was sent to Germany for further studies. While in Germany, every summer I would look for a Salesian work in which to practice my German and offer some pastoral help. The first summer I spent in a Salesian House near Münster where the Salesian Provincial resided. I told him: “I love Don Bosco very much. Could you take me in for the summer?” The good Provincial readily accepted my request. There were many young people. There I saw the Salesians giving the Good Night talk. I was even asked to give some Good Night talk in my very initial German. I did the same another summer with the Salesians of München. You can see that my relationship with Don Bosco never saw an interruption.

What special flavor the vocation of Salesian Cooperator do you bring to your pastoral life?

Don Bosco is a great saint, a great lover of youth. He also loved China very much. As a lover of Don Bosco, in my pastoral work for my people I have always felt that we Church people in general are not doing enough for the youth. Here in Taiwan, too, I feel that we are doing too little for the young. Now, as a member of the Salesian Family I see this even more clearly. Yes, we are not doing enough. Of course, there are many external difficulties that hinder us from doing more. Yet, the difficulties should not hinder us from doing more. See the Protestants. They face the same external difficulties, but they are much more successful in youth pastoral work than we are. Why?

How did you start your personal involvement with the Salesian Cooperators in Taipei?

What might be the contribution of Priest-Salesian Cooperators to the Salesian Family?

Any dreams or hopes about the Salesian Cooperators or Salesian Family in Taiwan?

What hope? My hope is that the spiritual life of both priests and religious in Taiwan be deepened. At present, I think it is too superficial. Really, in spiritual life we, whether diocesan or religious, are not up to the mark. There is no clear and deep desire to grow day by day in the spiritual life. We are just jogging along with our mediocre routine. Today’s digital culture with all its fascinations may be a reason for this general defect. As a young man in Europe, I witnessed how the faithful in general liked religious clergy more than diocesan clergy. The reason was that religious clergy appeared to them as more fervent than diocesan clergy. Now, I think that, unfortunately, also religious clergy has come down to our level of lukewarm diocesan clergy. So, why should not the Salesian Family in Taiwan inject fire and fervour in our Church life, just as the Focolare Movement and the Legio Mariae are trying to do?