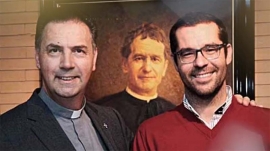 (ANS - Rome) - On the day on which the 150th anniversary of Don Bosco's Past Pupils occurs, we share an interview with the President of the World Confederation, Mr. Michal Hort.

What is the current situation of the World Confederation?

«I would use the word “constantly growing”; as you may remember, our biggest challenge in 2015 was to get in touch not only with those 100,000 registered past pupils, but with past pupils and friends of Don Bosco all over the world. Now, after 5 years I can say it’s a tough one. Having in mind and heart millions of past pupils that passed thorough the hands of more than 14,000 Salesians in more than 3,000 schools and another 4,000 works globally is one thing, but to get them organized is another one.

But we are working. Constantly. With help of Don Bosco, with our team, with the help of the Salesian Family; everyday more and more past pupils and friends of Don Bosco are discovering and deepening their identity by serving others. By using their skills, talents and professional capability in their local communities and life situations every day. Because that’s what don Bosco meant when he said to help each other. And that’s what is written in our Promise-prayer and should be day by day reality for us. Or better – our plan of life.'.

In these years of the Presidency, among the many realities you have encountered, which has remained in your heart

'All of them; all… each for different reason; “Old” Europe for strong history, rich activities and real influence in the economic and political society and tradition but also for struggles to speak to youngsters; “New” Europe for its incredible energy with no limits but without system and processes to be sustainable; Africa for the natural approach to help the poorest and freedom of life but struggling for the basic instruments and communication; Asia for its incredible growth, energy and capabilities but with no influence over the borders of the region; and Latin America for the well spread knowledge of Don Bosco and Past Pupils in everyday life with joy, but lacking the possibilities to enforce the structures and functioning system; That’s what remained in my mind and what the world presidency should target and balance. Especially through initiatives like “best practices” sharing through our global website, magazine and network of owned media. By discovering the differences inspiring the improvement».

How is the implementation of the Pro- gramming you did with your World Council going?

«It is going very well; especially in the jubilee year, but more about it later. We are reaching the goal to move the world presidency and confederation to the 21st century.

In order to be a supportive structure to our movement – again with the quote: “which past pupil for the 21st century?” what we are good at, as Presidency, is to enlighten, to inspire and to innovate; inspire the national and local structures and leaders, through programming, sustainable growth, project thinking; What I’m not satisfied with, and what we miss is a good and capillary communication with PPs and friends of don Bosco; that’s what we need to work on the most.

But there are 3 most important things for every past pupil reality all over the world: strategic plan, lists of pps based on their work skills, and list of projects; And at this point I also want to mention the importance of our team of presidency: between elected members, coopted members, projects managers and experts we are more then 30 people! Although they are all volunteers (they have their jobs and families), they work every day in their position and for this I’m immensely grateful to each and every of them».

Perspectives and Hopes - Salesian Movement. Which are the perspectives for the Salesian movement?

The other way I understand the “Salesian movement” are the lay people that love don Bosco but they don’t feel part of the Salesian family groups.

Some adults think that some young people are passive, indifferent, so distrustful and discouraged that they don't dream and plan anymore. What do you think?

They are always leaders of the revolutions – good ones and even bad ones. But we don’t need to be worry about any of this social clichés (even though they are true), because we have extraordinary example of don Bosco and his vademecum for young people. His deepness and love always attracted youngsters and was inspiration for them.

That’s what they need the most. As don Bosco did».

Your feeling for this 150th anniversary of us Alumni

«The 150th anniversary; It’s a gift for us. We can look back. e can remember good and inspiring things from the past. We can get inspired from 150 years of history and tradition. It´s huge. Its impressive. It´s beautiful. It brought many great ideas.

I would like to list some that World Confederation is promoting and developing. Everything starts with the “jubilee year” (June 2019 – June 2020) that we agreed on with the whole Presidency team during the presidency meeting in Colombia in 2018.

In order to understand deeply we prepared a Questionnaire. Questionnaire with a big Q. Simple, with few questions but very detailed. And we spread it to our stakeholders. Who are they? Well, not only the past pupils. We went much further.

We sent the questionnaire to fulfill to all the leaders of the groups of the Salesian family! In order to understand how our “family” sees us.

To have an opinion from outside. And we got beautiful feedback. This questionnaire is important also for other goal: based on the answers we are going to prepare the proposals of the modification of our world statute in order to make it actual for the past pupils of today and for the 21st century.

This questionnaire is important also for other goal: based on the answers we are going to prepare the proposals of the modification of our world statute in order to make it actual for the past pupils of today and for the 21st century.

Together with this there are other initiatives that are linked with the anniversary to be mentioned.

We are preparing the compendium/collection of 150 best practices/projects run by past pupils and compendium of 150 profiles of great past pupils to be inspired by. And we continue. We want to underline our founder – Carlo Gastini.

We prepared a book about him, we are discussing to install his statue in Valdocco, we want to start the beatification process. Another book prepared is about our Alberto Marvelli – beatified Past Pupil from Italy. Through this book we want to let Past Pupils know what does it mean Good Cristian and honest citizen in the real life. Not to forget our flagship initiative – “le tazzine”; we are going to renew the gift that the first past pupils gave to don Bosco on 24th of June 1870. They gave him a silver heart and the set of coffee cups. After 150 years, on 24th of June 2020, we are going to give 150 coffee cups sets (together with past pupils coffee) to the past pupils of today – starting with don Artime and the Pope.

The money we ear from these coffee cups sets we are going to distribute to 4 education projects (one in each continent) for the past pupils in the coffee sector (don Bosco in his youth was barista) – that’s why coffee. And don Bosco himself is helping us with our celebrations – because the Strenna for 2020 is the same as our motto “Honest citizens, good Christians”. Thank you, don Bosco!».

What about at the end?

«The most important message to give, most important words to say are always the same: Be good Christians and honest citizens. Explanation: Use talents that God gave us, the educations we received by Don Bosco and skills and capabilities of our professional lives to serve.

To serve to other past pupils, to the Salesian family and the community we live in. This means to be the Past pupil of Don Bosco.

To search for holiness in our everyday lives, in our families, in our jobs… in our professional, personal and pastoral life».