RMG – New Regional Councilor for South Asia: "We want to transform the lives of at least half a million young people" 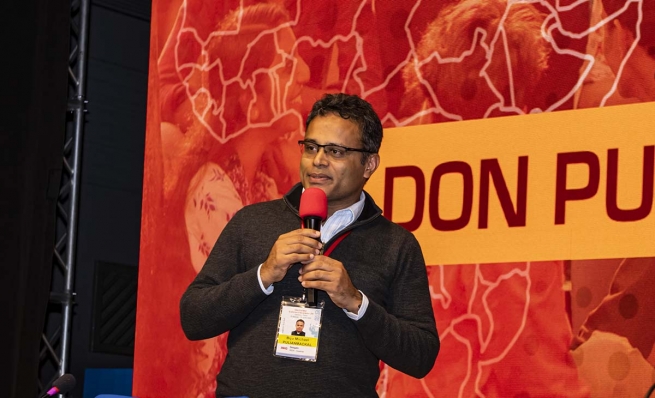 (ANS - Rome) - The 28th General Chapter has profoundly renewed the General Council of the Salesian Congregation. For this reason, today we begin, with Fr Biju Michael, Regional Councilor for South Asia, a series of interviews designed to get to know the new Councilors who assist the Rector Major in the animation and government of the Congregation a little better.

What motivated you to become a Salesian?

My very first inspiration for becoming a missionary came from being a member of the boy’s sodality for little missionaries in my home parish. It was further strengthened by the reading of the picture-story books narrating the journeys of the great missionary of India, St. Francis Xavier. At the time I did not know the peculiarities of differences in Rites in the Church or of congregations and orders. It was a Salesian Priest, Fr. Thomas Poovelickal, who first invited me to become a Salesian. I joined the apostolic school (at that time called aspirantate) at Mannuthy while continuing my studies in class 8. My experience of living with and learning from the teaching and example of many Salesians including my own Cousin brother, Fr. Jose Mathew Kuttianimattathil, helped me to recognize my call to be Salesian. My initial dream to be a missionary was realized within the same Salesian vocation and I was allowed to depart for the missions of North East India at the age of fifteen and joined the Guwahati Province in 1985. Since then, my Salesian vocation was nourished by excellent confreres in that great missionary region where I completed almost all my initial formation. During this time, I was also blessed to be formed in the various other Provinces of India for short periods of time. I am also happy that as Salesian Missions in North East India is getting ready to celebrate the centenary of Salesian presence, a confrere from the three Provinces of what was long ago known as the Assam Missions is elected to serve in the General Council of the Salesians.

What do you bring with you from the experience of the GC28?

GC 28 was my first experience of a General Chapter. What impressed me most in the first days was the family spirit in the assembly of nearly three hundred members and helpers. As Salesians, we could fly in from various parts of the world, having never met before, and yet live as brothers from day one. As the work of the Chapter progressed, I was elected to be Secretary of the English-Speaking Commission (Commission 1) and it gave me the opportunity to see how all of us Salesians from various continents were equally passionate about our charism and how it is being realized in our different cultural settings. Our religious consecration to minister to the poorest young people was a theme that returned again and again in all our discussions.

Another thing that really characterised our stay together was the absence of fear in the face of the onslaught of the Covid-19 pandemic. Despite the increasing news coverage in the initial days of the pandemic in Italy, each and everyone seemed to be absolutely confident of the protection of Our Blessed Mother, Help of Christians. After the Chapter closed abruptly due to the pandemic, I was among the many confreres who could not travel back to their countries and were stranded. Once again, that was an experience of absolute fraternity, care for each other and above all filial trust in the protection of God through the intercession of the Blessed Mother. The Basilica of Mary Help of Christians and the Salesian roots of Valdocco (Pinardi shed, chapel of St. Francis de Sales, etc.) played its magic for all of us who were stranded for more than two months after the end of the General Chapter.

In these first few weeks, marked by the Covid-19 restrictions, what have you been able to see, know, learn about the new role? And what do you expect for the future?

In the first months after the Chapter was closed, I was stranded in Italy, along with many other confreres from various parts of the world. The Valdocco community led by Fr. Guido Errico, the Rector, and Brother Giampietro Pettenon, the administrator, made us feel at home. The Rector Major and the General Council members continued to strengthen us with their presence and frequent communication. The Rector Major stayed an extra week with us at Valdocco and after he returned to Rome, even made special video messages only to interact with us.

Among those stranded, those from the South Asia Region formed a large group. In ways that only providence could have foreseen, this gave me the opportunity to have a personal dialogue with nine out of the twelve Provincials and their chapter delegates and to learn more about each of these Provinces in the region. We also held three days of brain-storming sessions to look at the needs and priorities of the region in the light of the discussions at GC 28 and the concluding message of the Rector Major. We are now awaiting the publication of the six-year plan of the Rector Major and the Council to fine-tune our discussions at our next SPCSA.

God’s ways are mysterious (Cf. Is 55:8-9)! Being stranded in Italy also gave me the opportunity to join the extraordinary session of the General Council in April and the Summer Plenary session of the General Council in May-June. I have been impressed with the family atmosphere, professionalism and, above all, deep concern for the confreres and the Congregation that permeates all discussions in the Council. As is evident, there is a lot to learn especially at the start of a ministry in the General Council. The senior members and the team that works closely with the General Council are helping us new members to understand the role of animation and governance at this level. Fr. Maria Arokiam Kanaga, my predecessor, was also present at the generalate and I could approach him regularly for guidance. There is also a large community of generous confreres and lay collaborators at the generalate who are enabling the various sectors and regions to function smoothly. With the guidance and advice of so many helpful confreres, I am hopeful of learning quickly to service better.

This period has also provided opportunities to be in various online meetings with coordinating bodies in the region. While the opportunity to meet face-to-face has been curtailed, the possibilities to dialogue and plan have not been missing.

For the future, the immediate hope is to return to the South Asia Region to visit the confreres and works in all the Provinces. The SPCSA is scheduled to meet soon to strategize how to implement the General Chapter deliberations in our region.

What do you dream of for your region six years from now?

In the coming six years I hope and pray that our South Asia Region may continue to grow in the Salesian charism by serving the poorest and neediest young people in the various countries of our region. As a verifiable goal, we would like to set indicators in the line of poverty eradication in the families of a large section of our young people. Our planning meetings have initiated the move to draw up details of a realistic plan. We would like to set the goal of tangible and verifiable transformation in the lives of at least half a million poor young people and their families. How wonderful it would be for us Salesians to help remove poverty from 500,000 families in six years! This would involve youth ministry that focuses on a vocational perspective and concentrates on preparing honest citizens and good Christians who are able to serve society beginning by moving their families out of the clutches of poverty. Helping the young to accept various vocations through capacity building, skills training and holistic education which includes education in the Gospel values that will lead to integral human formation could be a path to achieve this. Following the indications of the General Chapter, we hope to make every effort to strengthen our religious consecration to serve the poor youth as communities and form ourselves together with all our lay collaborators, especially of the Salesian family, to achieve the all-important, common, charismatic mission of serving the poor youth of our region.

We are a region that is blessed with many characteristically Salesian charismatic presences. We would like to network better and build synergy among all the Provinces to achieve Don Bosco’s vision. The region has well established coordinating bodies and they have come together these days in online meetings to plan a concerted effort which will also be visible on our new website: www.donboscosouthasia.org.

The Salesian youth ministry goes on because of the persons who dedicate their lives to it. We hope that as a region we will not only strengthen our collaborative work with lay people but also grow in vocations to the Salesian religious life (lay brothers and priests) and be able to send many missionaries to serve poor young people around the world. Consistent formation (initial and ongoing) as per the indications of the Chapter would be required to build capacities and motivations of all our personnel involved in the mission.

One last question: what are your prospects as regards the theme of communication in the region?

GC28 underlined the importance of being present in the new digital courtyards. The renewal of the communication portal of the region - which changes its name, referring no longer only to India, but to the entire South Asia region: www.donboscosouthasia.org - aims to unite and represent together the image of the Salesians towards the world and towards young people in particular; and will also serve to encourage, through an app and a reserved area of the site, internal dialogue between the Salesians of South Asia.