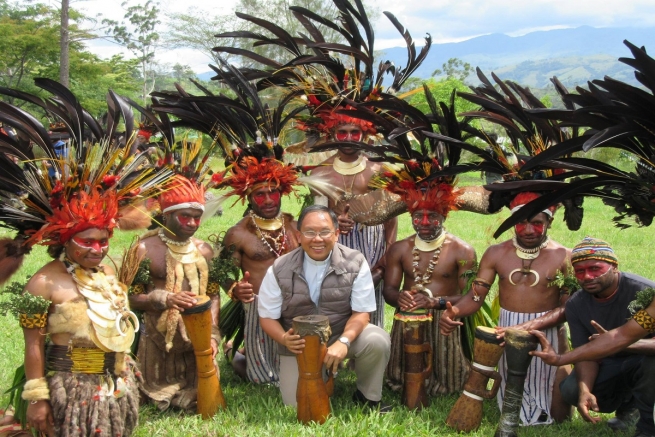 (ANS – Rome) – Fr Alfred Maravilla was elected by the GC28 as the new General Councilor for the Missions. Below is an interview with him, released to ANS.

What motivated you to become a Salesian?

My parents wanted me to go to the Salesian school in Victorias, Philippines against my will. But I can say that knowing the Salesians was a surprising thing for me. The Salesians seduced me! These priests and young Salesians playing with us made me realise that there was something different here. Little by little they involved me in the youth centre. And the rest is now history. When I came to know the Salesians, the Congregation was in full missionary fervour, not only because of the ‘Africa Project’, but also because Fr Egidio Viganò, at the time Rector Major, had asked every province to “adopt” a missionary territory. Many from my Province had left as missionaries to Thailand and then to Ethiopia. My heart was restless because I, too, felt deep within my heart the call to leave familiar shores, and set my heart upon the deep. Thus, I presented my missionary application, hoping that I would be sent to Latin America. Meanwhile Father Viganò had given our Philippine Province the responsibility to begin the Salesian presence in Papua New Guinea. Hence, I was sent there. My initial joy turned into disbelief and fear. I wondered if I would survive in such a difficult country, with endemic malaria, with people and cultures totally different from my own and difficult climatic conditions. I was twenty-three years old! My fears and anxieties were soon transformed into deep love for “my people”, for their cultures and languages. Together with 5 other Salesians we started a new presence in the capital, Port Moresby. It was hard to be a pioneer. We had to improvise everything. But they were years full of joy, initiatives, and creativity. Today it is a small Vice-Province with 50 confreres from 16 nationalities, 12 of whom are local. I was Provincial until my election during GC 28.

What do you bring from the experience of GC28?

In these first months, marked by the restrictions of Covid-19, what have you seen, known, learnt regarding the new responsibility? What do you expect for the future?

The limited possibility to travel allowed me to visit our Mission Offices in Europe; we initiated on-line meetings with the Province Delegates for Missionary Animation (PDMA) in some regions; with the Missions Sector team we are working on the six-year program. At this moment we are trying to reinvent how to animate the Congregation. We are facing an unprecedented situation. We are still discovering what the post-COVID ‘new normal’ will consist of ...!

What do you dream of for your Sector for the next six years?

The General Councillors are the closest collaborators of the Rector Major.  We work together to realise the objectives that will be set in six-year programme of the Rector Major and his Council. Moreover, the dream of every Councillor for the Missions is codified in the Salesian Constitutions: that is, to promote the missionary spirit and commitment in the Congregation (Const. 138).  For me it is necessary to translate this ‘missionary spirit and commitment’ into ‘a permanent state of restlessness’ for the whole Congregation. This means always willing to dare the improbable, so that we learn to trust in the Lord who invites us to constantly set our hearts upon the deep!

The fact that during GC28 the Chapter members elected the General Councillor for the Missions literally ‘from the end of the world’, certainly the Spirit wants to tell us something. For me it brings us back to Don Bosco’s missionary dream where he saw the youth of Oceania shouting: “Come help us”! It is the same cry today of many young people from the islands of Oceania and from all over the world.  Oceania has received so many missionaries. I believe that the time has come for the local Salesians of Oceania to be missionaries in other regions of the Congregation too! But it is also an invitation to all Salesians throughout the world to offer themselves generously as missionaries ad gentes, ad exteros, ad vitam for the whole world. Therefore, my dream is twofold: that the whole Congregation grows in missionary ardour and commitment; and that soon local Salesians from Oceania offer themselves to be missionaries.  Who knows if at GC29 we would be able to speak about a possible ‘Project Oceania’? I am sure only of one thing: “The Holy Spirit works as he wills, when he wills and where he wills... We know only that our commitment is necessary”! (Evangelii gaudium, n. 279).