Hong Kong – "School formed my education and strengthened my faith": interview with Andrew Yuen, Past Pupil of Don Bosco 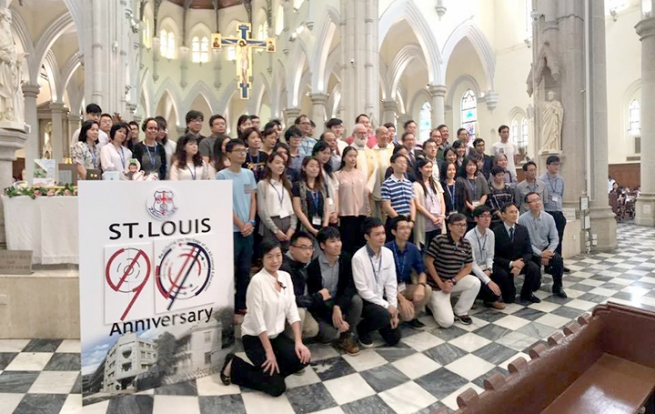 (ANS - Hong Kong) - The Association of Past Pupils of the St. Louis School Old Boys Association – SLOBA - in Hong Kong is one of the oldest in the entire East Asia-Oceania Region. The Salesians in fact took over this school in 1927. Mr. Andrew Yuen studied at “St. Louis” and has been working as a related publisher since 2003. In an (abridged) interview he spoke of his experience, recalling past times and sharing dreams for the future.

As a St. Louis School Past Pupil, you were educated in the style of Don Bosco. How did this affect your life?

School played a very important role in my growing up. It formed my education and strengthened my faith. Values ​​learned in school have influenced the rest of my life and are now being passed on to my family and the people around me. It was Fr Edward Kowala, who was my religion teacher, who laid the foundations: it is thanks to him that I began to appreciate teaching. But I remember that the other Salesians in the school also interacted with us students. We learned a lot from them, not just at school level.

How did you become involved with Don Bosco Past Pupils Association?

It felt like a calling. At first, I helped out as a volunteer, giving students career guidance and providing free tutorial service on weekends. I was later invited by the SLOBA president to join the Council and was selected to represent St Louis School at the Hong Kong Past Pupils meetings.

2020 is the year of the 150th anniversary of the Past Pupils. What does it mean for SLOBA?

It is absolutely a good opportunity to connect all Don Bosco Past Pupils together, although we are currently restricted by the pandemic. I personally hope when the world is back to normal, we can once again have an opportunity to celebrate the anniversary. However, as Past Pupils we are also proud that since last February we have received many donations – facemasks, hand sanitizers, toothpaste - which we promptly sent to the Salesian schools in Hong Kong and to the "Braga House", the retirement home of the Salesians in Hong Kong.

What dreams do you have for the future of the Past Pupils in Hong Kong?

Salesian schools have nurtured lots of fine past students and good citizens in Hong Kong society. The success came from the school managed by Salesian Brothers and Priests who were involved in school operations and teachings. They had also good communication and sharing of visions with teachers and students. However, now with many Salesian schools not having Salesians as school principals or spiritual directors, the relationship becomes disconnected. I hope this could be restored in some way in the future.

The complete interview, in English, is available on AustraLasia