RMG – Rector Major's Vicar: "May the Congregation continue to be alive and prophetic" 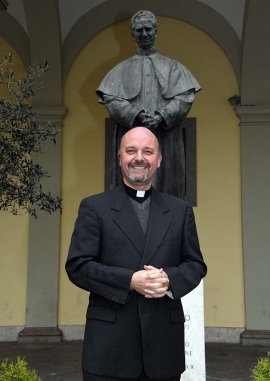 (ANS - Rome) - At first he led the Special Circumscription "Piedmont and Valle d'Aosta" as Provincial, then he accepted the challenge of animating a newly established Region - the Mediterranean, after the GC27, as Councilor: Fr Stefano Martoglio, today Vicar of the Rector Major, is a Salesian with a lengthy résumé, a Salesian who takes on his responsibilities full on. Today he tells ANS about his recent past and his dreams for the future.

What do you bring with you from the GC28 experience?

This time, more than the previous chapters in which I'd participated, I was struck by the great harmony of the capitulars on the basic vision and on the problems that the Congregation, as is normal, is going through. It struck me a lot, because many capitulars did not know each other before, many were in their first chapter experience ... Yet there was a great harmony of vision and a profound and widespread understanding on the path that we as a Congregation must take. I believe it is a very clear expression of the work of the Holy Spirit.

In the past six years, what were the fundamental axes of your work?

In the last six years, I had the good fortune of being able to accompany the new Mediterranean Region, born in the GC27. Precisely in the accompaniment of a new Region, daughter of two previous Regions, I had a magnificent experience of the Congregation. Not a sum, but the construction - together with the Provincials and all the confreres - of a new identity in a region that is not only international, but intercontinental: the Salesian presence in northern Africa, in an Islamic context; the precious and bleeding presences of the Middle East; the entire belt of southern Europe, from Portugal to Romania. A magnificent reality, rich in history and tradition… but with great innovations in lay co-responsibility, in “remaining” in difficult and therefore very important contexts… And with a rich and lively Salesian Family.

In six years, what is your dream for the Congregation and the Salesian Family?

The dream, which is also a task, is that the Congregation continues to be alive and prophetic. Our charism has an immense freshness and vitality, impressively current, of today ... Being prophetic is knowing how to release this vitality as a Congregation and as a Salesian Family, for us and for the Church.

May the Salesian Family, which is progressing well, be increasingly a movement of "believers", at the school of God on the steps of the Salesian charism. A movement of believers, lay and inserted in the life of the Church.