RMG – "I'd like to make myself available to everyone": new ADMA World Spiritual Animator speaks 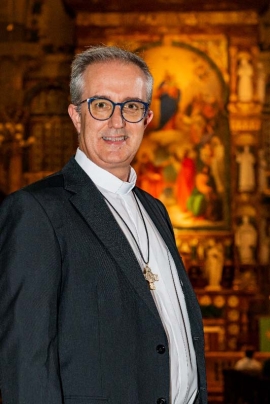 (ANS - Rome) - Fr Alejandro Guevara Rodríguez, SDB, a 47-year-old Spanish Salesian, has been the new World Spiritual Animator of the Association of Mary Help of Christians (ADMA) since last 20 September, when the Marian Day in Turin-Valdocco took place.  This is how he presents himself to the members of the association and to the whole Salesian Family.

Fr Guevara Rodríguez, where do your human and Salesian roots lie?

I was born in Badajoz in 1973 and lived there until the age of 18 with my family: my parents Alejandro and Francisca and two younger brothers, both teachers.

I began my Salesian journey in the pre-novitiate in Cadiz (1991). I lived the novitiate in Sanlúcar la Mayor (Seville), professing on 16 August 1993, and I was ordained a priest on 8 June 2002 in Seville. After obtaining a license in Educational Sciences from the Salesian Pontifical University, in the 2002-2003 academic year, I returned to my "Spain-María Auxiliadora" Province in Seville and accompanied the aspirants and pre-novices for 5 years. I served three years as pastoral coordinator in Granada, then I prepared for one year in Genzano to become the Novice Master of Spain and the following year director of the Postnovices.

How did you get to this position?

In 2014, the new Provincial, today Card. Cristóbal López Romero, asked me to continue in the Provincial Council as Provincial Delegate of the Salesian Family, thus starting a new stage in my Salesian life.

Then in January 2020, the Rector Major proposed that I go to Valdocco as the new spiritual animator of the ADMA Primary, becoming his Delegate at the world level for ADMA. After a few weeks of discernment and prayer, I replied to the Rector Major placing myself at his disposal. My appointment was made public on June 5th and I've been learning more about the new reality and the new service ever since.

In summary, my Salesian life has developed for many years in the formation houses: pre-novitiate, novitiate and post-novitiate. I had a pastoral experience in a Salesian house and since 2014 I have been working with Salesians and laity in the area of ​​the Salesian Family. I am very grateful to the Congregation for the opportunities offered and the services requested, because they helped me to grow as a person, a Salesian and a priest.

What do you wish to say to the members of ADMA and the Salesian Family?

I would like to take advantage of these first words to thank my predecessor, Fr Pierluigi Cameroni, for the work he has done with generosity, enthusiasm and wisdom, accompanying and renewing the Primary ADMA of Valdocco; he has also encouraged, spread and propagated devotion to Mary Help of Christians throughout the world. I am very grateful to him.

Finally, I would like to make myself available to everyone: Salesians, spiritual animators, local councils, associates, devotees and children of Mary Help of Christians. We have a Mother who loves us, takes care of us, protects us and we, as good children, entrust ourselves to her.