RMG – In conversation with the Secretary of the General Council 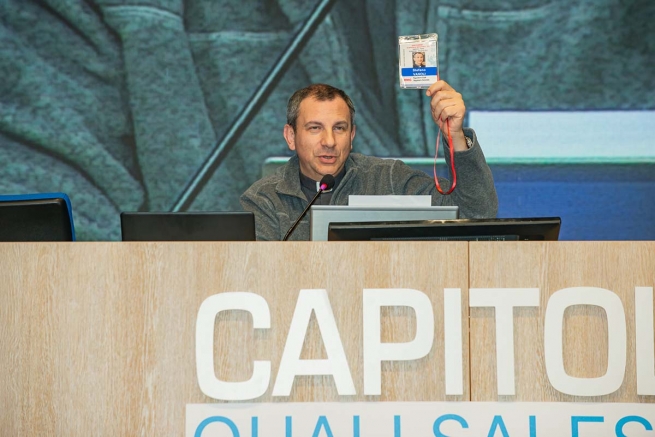 (ANS - Rome) - Fr Stefano Vanoli, a Lombard Salesian, born in 1968, has been the Secretary of the General Council since 2015 and at the 28th General Chapter he was its Regulator. Today he talks a little about himself and his post.

What prompted you to become a Salesian?

At the origin of every call is the Lord, whom I have learned to know through many people: my parents, the Daughters of Mary Help of Christians, the Salesians, and the priests of my parish. Surely the fact of having always frequented the Salesian environments has influenced the response to the call of the Lord.

Some factors were important in my journey: the daily Eucharist, the prayer of the psalms, especially the praises, the fortnightly confession, a permament spiritual director, oratorian animation, meditation, study and personal reading, the attendance of “healthy” and stimulating environments and experiences.

What do you bring with you from the GC28 experience?

I must say that I had the gift of participating in two previous General Chapters: all enriching experiences. But the experience of the GC28 was unique, as I was chosen as the Regulator. In this role, many details must be kept in mind ... The uniqueness of the GC28 is also given by having been celebrated in Valdocco. Personally, it was an experience of great communion with all the confreres.

The other element that I cherish is related to the theme. The three articulations - presence in the midst of the young, profile of the Salesian, mission and formation shared with the laity - outline the figure of the Salesian for today's young people: a decisive theme.

Finally, the anomaly of a Chapter that has undergone profound changes due to the pandemic prompts us to question ourselves. What did a Chapter celebrated in this way mean? I think it's necessary to ask ourselves what the Lord wanted to say to us and what He is still telling us even with this work's development.

Can you better describe the Secretary of the General Council's work?

The Secretary General participates in the meetings and in the life of the General Council. He draws up and keeps the minutes of the meetings and maintains contacts with the various Provinces. Almost daily, as Secretary, I have contacts with the Provincial Secretaries and also with the Provincials to accompany them in their service of governing. I follow the preparation and editing of the official documents of the Congregation, the statistics of houses and confreres, the appointments, the opening and closing of houses and/or works, the preparation of the Council meetings ... In short, many aspects of the ordinary and extraordinary administration of the life of the Congregation. This is a task that allows one to know the reality of the various Provinces and the mission we carry out in the world.

How does your service to the General Council become a service to young people?

I'd like to quote an expression from Pope Francis' recent encyclical, Fratelli tutti, which clearly highlights this relationship: “It is an act of charity to assist someone suffering, but it is also an act of charity, even if we do not know that person, to work to change the social conditions that caused his or her suffering. If someone helps an elderly person cross a river, that is a fine act of charity. The politician, on the other hand, builds a bridge, and that too is an act of charity. While one person can help another by providing something to eat, the politician creates a job for that other person, and thus practices a lofty form of charity that ennobles his or her political activity.” (FT 186). If we substitute the word “mission” for the word “charity”, we understand well the relationship that exists between those who are most directly in contact with young people and those who are less directly so.