Cambodia – From Colombia to Cambodia with the heart of Don Bosco 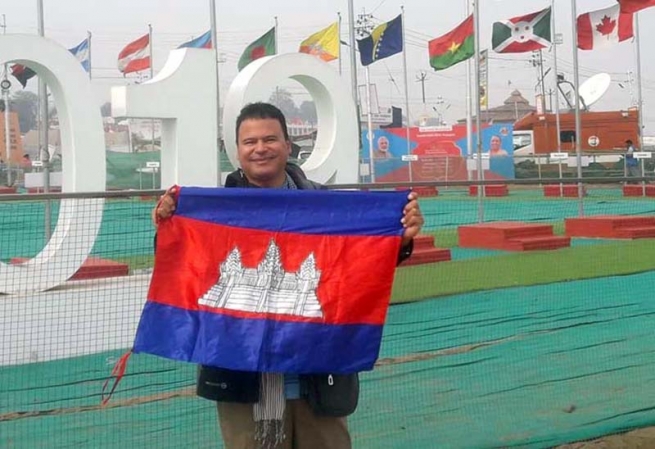 Can you share the birth and growth of your missionary vocation ad gentes?

I see the birth and growth of my missionary vocation in three elements: my search for spirituality, my belonging to the boy scout movement and my vocation to social communication and journalism.

My search for spirituality started in my family. My father is a teacher of philosophy and my mother has been a very devout Catholic. Although we are a poor family, there were always books around the house. When I was a teenager, I read a lot about different philosophies, theologies and traditions. Jiddu Krishnamurti was probably one of the authors who made a great impact in my life. It filled my teen years with dreams of knowing peoples from other lands and continents.

As a committed boy scout, I read the stories of Baden Powel, the Scout movement founder, his adventures in India and Africa, grew with the charismatic image of that English general who opened himself to the boys of all times. With him, we were zulues, redfaces and Indias.

Then, I went to the university, to study social communication and journalism and I knew Don Bosco. He catalyzed all those experiences and dreams in going beyond, offering myself for a mission where God could need me and my first preference was always for Asia.

What do you bring to Asian mission land from your native Catholic Colombia?

I have always been connected to the Asian spirit and it comes from the fact that we Latin Americans are deeply connected to ancestral Asia. Most of us are descendants from the ancestral natives of North and South America. They crossed the Bering Strait between 40 thousand to 20 thousand years ago and populated the entire Western Hemisphere. Those primitive populations in the Americas came mostly from Central Siberia and East Asia. It fascinated me since my young age, the fact that my far ancestors walked iced paths to discover a new world and to plant a new humanity over there. When Fr. Luciano Odorico asked me where I would like to go, I told him Siberia and I think it keeps something from me being a Latin America.

That spirit of belonging, I think it is what I brought with me. I feel close to the Asian people and I try to discover those traces that join us. Even many of our social dramas, cultures, ways of thinking between regions so far away as South America and Southeast Asia. When you visit the Angkor temples of Cambodia, you immediately think of the Maya temples of Mexico and Central America.

Your country, Colombia, is mostly Catholic. How important is it for your mission in a country like Cambodia that is mostly Buddhist?

Catholicism in Colombia and Latin America is very rich in expressions, schools, doctrines, theologies. Coming from a poor area of Medellin and growing in a Carmelite parish, put me in the face of liberation theology during the 1970s and 1980s. During the pontificate of Pope John Paul II, it got several corrections, but the spirit of such theology, the one of Jesus Christ with the people, among the poor, has always been in my heart. When I came to Cambodia in 1999, I saw a lot of poverty and all those homilies of my teen years, all those actions in favour of the poorest, preaching to the marginalised the love of God, it was lit in me in front of the Cambodian people. Then, what I brought from my Latin American Catholic world to this Buddhist society is that Jesus loves the poor very much and gives his life for them, without matter their religion, race, language or ideas. Love the poor and Jesus to the last blood drop of your heart.

What did you learn from the Cambodia people and especially from the young?

The Cambodian people are very simple. They live fully in the present moment, they accept anything, especially if they feel in community, with others. Here you discover how complicated is the Western life, with so many conditions, dependencies and all in hurry. Cambodians are never in a hurry. They are experts in discernment, meditation, they take decisions with time, they know how to wait. This attitude I have seen in most Cambodians. Today I see some Cambodians trying to look like Westerns and immediately you recognise their lack of authenticity. Many Westerners come to Cambodia for a sort of therapy, to recover from stress, to rest, because these people are full of peace.

About the young, since I came 21 years ago to today, I have seen many changes. I can describe how the interests and worries of Cambodian youth have changed in these last two decades. When I came, they were in a hurry to survive. Today, I see a hurry to get money at any cost and it worries me.

But Cambodian youth, with that simplicity of heart, are smart. They can learn languages very easily. They are very good observants of cultures, traditions, they understand symbols and they are observing the world with great attention. When I came for the first time, Colombia was something unknown to them. Today they have more information, and it is good. I think I have learned from Cambodians their way of simplicity, observation and appreciation for the present time.

Your specific contribution to the Salesian mission is about Social communication?

Before joining the Salesian Congregation, I finished studies in social communication and journalism. In my training, I led a magazine known as Primavere Mundo Joven of the Salesian sisters in Medellin. It was the platform that made me know Don Bosco. I felt that my vocational interests were attracted to this Italian priest that appreciated very much the communication of the spirituality of God to the youth. As a wonderful addition, Saint Francis de Sales was the patron of the Catholic journalists. It was as everything was connected for me.

In 2007 I presented to the Cambodian Delegation (in that time it was not yet a Delegation) the proposal to open a social communication school in Don Bosco Sihanoukville. Fr. John Visser, the Rector, was very much motivated by the idea and he supported me with all his dedication. It became my great mission: I had rural youth studying social communication and journalism and it was the beginning of a great adventure.

My dream is to be able to attract more youth to the Catholic Faith and to promote more Cambodian Salesian vocations. I am very happy to share our Salesian projects with Buddhist, Muslims and natural religions, but I think it is also important to have a team of youth sharing a following for the Lord. It takes time, but we put all our Faith in the Lord, who is ultimately the one who calls you to his following.

I want to produce more Salesian literature in Khmer Language. Same for videos and more material. Now we are working with the Khmer Salesian Bulletin. We are producing a movie: the life of Don Bosco that would not be only in Khmer Language, but with Cambodian people and in a Cambodian context.

Cambodia delegation is among the youngest Salesian countries in the world?

Yes, Cambodia is an authentic missio ad gentes. This is one of the authentic frontiers of the Catholic Church. It is not only the Salesians. The Cambodian Catholic Church is very small. Sometimes we work together with other Catholic congregations and the Bishop as we belong to the same religious family. It is what mission ad gentes is about. We are not working here with Catholics, because they are very few. My students are mostly Buddhist, some of them are Muslims, some of them are natural religions. In this context, the light of the Lord must remain always lit. During the Khmer Rouge era (1975-1979), all religions were forbidden. Some surviving Catholics kept their Faith in secret, praying in the rice fields. We live here hearing those testimonies. We have a Church living in simplicity, meditation, contemplation, without asking too much from the government, from the world... We ask everything from the Lord, who is among us in silence and brings us to his plans.

Missionary challenges and opportunities, to enlighten any young SDB who is considering the missionary vocation ad gentes - ad vitam?

If you are considering being a missionary ad gentes - ad vitam, you have to know that it is like a vocation inside your religious vocation. When you are young, the vocational promoter instructs you that when you enter religious life, you have to abandon your family and the world and to embrace Jesus fully. Many do that with great joy. But when you are a religious person, if Jesus asks you to go to the missio ad gentes, then he is asking you to abandon even more things:

First you have to leave your own country, it includes your language, your culture, your traditions and your way of thinking.

Second, you have to go to a place you don’t know, with very strange people, a difficult language, odd traditions, other religions.

Many turn off from such a second invitation. But if you say yes to the Lord in the first call, you must be ready to say yes to the second call or to the deepening inside your vocation. Then, going to missio ad gentes is a vocation, a call from the Lord. It does not come from fantasies or the adventure ideas. It comes from your great love to Jesus.