Spain – Rector Major: "I very much believe in the strength of young people and I'd like us to have more trust in what they can do in the name of Jesus" 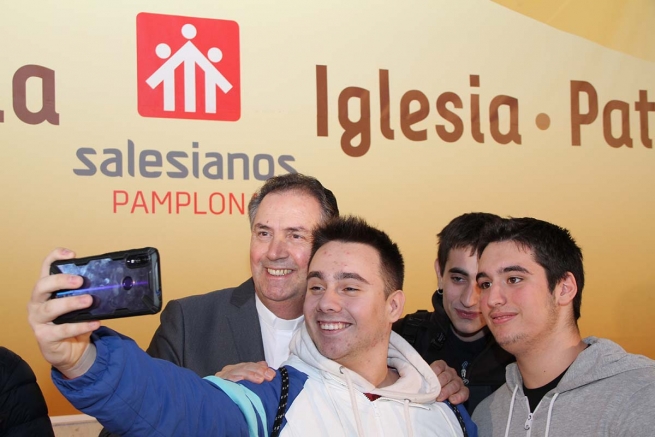 (ANS - Seville) - Today we are publishing the second part of the interview that the Rector Major, Fr Ángel Fernández Artime, granted to the Spanish newspaper El Correo de Andalucía. The topics touched on range from personal emotions at the moment of his appointment to the future of the Congregation and the Church, from the role of young people for evangelization to the characteristics of the Salesian for today's young people.

How did you feel on the day of your election as Rector Major?

I felt that it was something bigger than me, that it didn't have to be me, that many other Salesians present at the 27th General Chapter could offer this service with much more capacity. I never imagined it could happen, I didn't expect it at all. Yet, once it was more than evident that the election of my Salesian brothers rested on me, that 25 March 2014, in a moment of simple, truly believing and trusting prayer, I "abandoned" myself to all that could be. And I can assure you that I was inundated with a great Peace, which accompanies me until today. I must confess that even today I continue to ask the Lord in personal prayer why, through the mediation of my Salesian brothers at the Chapter, His "gaze" fell upon me. And I leave it there. In trusting silence.

Where do you think the future of the Church is?

In my humble opinion, I must say that the future of the Church is in God, in authentically living the Gospel of Jesus Christ. It is in a Church of the poor and for the poor. The future of the Church is far from all the temptations of power. The future of the Church passes through the anonymity of so many lay people, consecrated persons and priests who continue to give their lives in simplicity, every day. Without doubt, the future of the Church lies in continuing to fully respect the dignity of women. In short, these are things we already know, even if at times, or not infrequently, they upset the many ears that hear them. I cannot fail to say and acknowledge that Pope Francis does nothing but invite us to live the Gospel with the consistency proper to believers touched by the conversion to Jesus Christ. And how often uncomfortable it is because he is simply a Shepherd according to God's gaze.

What should the role of young people in evangelization be?

I will say this by appealing to Don Bosco, the one who founded a Congregation with those same young people whom he helped to grow. When the time came, he proposed that everyone do the same thing together, for "their own salvation and the good of their companions." In short, he proposed that they be authentic evangelizers and apostles to other boys. Personally, I strongly believe in the strength of young people in all things. And I wish we had more trust in what they can do in the name of Jesus.

What do you think of evangelization through the Salesian Confraternities?

It is a precious reality, especially in the south of Salesian Spain, but also in other places. As far as I know, they are an excellent contribution of the Salesian charism to evangelization in the field of “popular” religiosity, of the people, which has been a real antidote to growing secularism. It is a space of ecclesial commitment where the laity have a great role to play. I very much appreciate the progress they are making in the formation of youth groups, with great vitality, and also in paying attention to the poorest. I encourage my Salesian confreres to continue to accompany the formation and spirituality of these Confraternities with pastoral zeal and to deepen their Salesian identity.

Do you think the Congregation is in danger due to the decline in vocations?

It is true that I speak and must speak only of the reality that I know; of the 14,500 Salesians of Don Bosco present in 134 countries, belonging to 90 Provinces and Vice Provinces. Our Salesian Congregation is blessed every year with around 450 novices around the world. It is a great gift. At the same time, I must say that the vocational reality in Europe is very poor for us too. But the life of the Congregation is not measured on the basis of number, but on the basis of the fidelity of the Salesians of Don Bosco to the charism received from our founder, Saint John Bosco. As long as the Congregation is faithful to that charism, with a predilection for the poorest and most needy boys and girls, for the least, for the humble, and this in the name of Jesus, the Congregation is in no danger. The organization, the color of the skin, the geographical areas may change ... But the charism shall be assured. In other words, the future of the Congregation and fidelity to the charism go hand in hand.

How should today's Salesian be?

I must tell you that this was the theme of the 28th General Chapter held in Turin-Valdocco in the months of February and March. And the answer is: a Salesian who is a man of faith, happy with his life and his vocation, capable of listening, of dialogue and of reaching out to today's young people. A Salesian who builds bridges, who is able to accompany the growth processes of young people. An educator in the faith who makes available, in freedom, that which fills us with meaning. Ultimately, people who want to offer and share what they are and what constitutes us as consecrated and believers.

As Rector Major, what do you expect from the Congregation in the coming years?

I hope that we will be all that I've just said and that, at the end of the next six years, if God gives me health, I can say something like this to Don Bosco: "Dear Don Bosco, this is the Congregation that I am presenting to you after twelve years. We have done the best we have known and been able to do, in the name of JESUS ​​and for the benefit of young people. I hope you can recognize yourself in it. If so, it will have been worthwhile.”

In conclusion, what message would you like to send to the Salesian Family in Spain?

With great pleasure, I'd like to deliver a double message. One aimed at the many people who will be able to read me and who have nothing to do with the Salesian Family in Spain or Andalusia, but who look with sympathy at the figure of Don Bosco, or at least with curiosity: I say to continue to believe that there are good people in the world, many good people, as they certainly are too, and as we Salesians of Don Bosco try to be, despite all our limitations; and I invite them to join the many people who transmit hope and not negativity. Because the world becomes more liveable with people like that.

And to the Salesian Family in Spain and Andalusia I say that I feel very proud of that religious family that we are: simple, but with freshness; friend of the people and eager to do good. A family of Don Bosco who believes in young people and, I ask you, continue to believe in these same young people, the ones in flesh and blood that you see every day. I tell you to convey to the people that there are reasons for hope and that together, by joining together, we can continue to do something good. I tell you that Don Bosco dreamed of us and founded us not to focus on ourselves, but to be a family with open doors, so that people can say that there, where there are these "from Don Bosco", there are good people that, if they cannot help you in every moment and in everything, at least they welcome you, listen to you and accompany you.

And I would tell them that our strength lies in being a family, in being for others and in being who we are in the name of the Lord. And finally, I would add another thing: that we continue to believe, like Don Bosco that "She did everything", the Mother, and continues to do everything even today.

My best regards to all readers, together with my wishes for a good and holy Christmas.