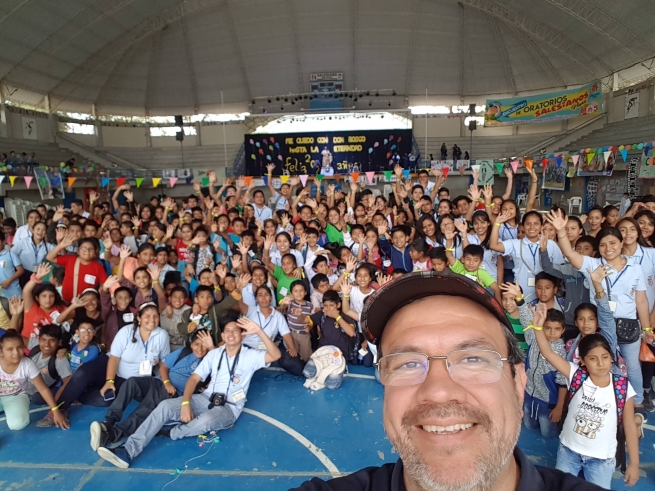 (ANS - Lima) - The Salesians have been present in Peru for 130 years, spread throughout the country and they are dedicated to treating situations of the greatest vulnerability. Presenting the current state of the Salesian Province of Peru today is its Provincial, Fr Manuel Cayo.

What is your role?

I try to accompany the confreres, the young people, the laity, the communities, the processes, the projects in the best possible way and counting on many good people who are part of Don Bosco's dream in these lands.

How many years have the Salesians been in Peru?

The Salesians arrived in Peru, in this beloved country, in 1891. Peru represents a challenge for the Salesians. Along the Pacific there is the coast, characterized by a continuous desert. Lima is located right in this desert. Then there is the Sierra, which includes the entire territory of the Andes, with very high peaks and populated by the Quechua, the descendants of the Inca people. The eastern part of the country instead slopes into the Amazon basin with a tropical climate and indigenous tribes that can only be reached by river.

What are the most significant works?

The presence in Peru is marked by the variety. We have 10 schools, nine Vocational Training Centers, eight “Don Bosco Houses” for adolescents and young people at risk, three mission areas (two in the Amazon and one in the Andes), seven oratories-youth centers and five parishes. The institutional priorities we have chosen are three: the “Don Bosco Houses”, the Missions and the Vocational Training Centers. There are large schools attended daily by thousands of students, ranging from childhood to high school, and many parishes, both in the cities and in the Amazon rainforest, with dozens and dozens of chapels scattered in the villages so remote that the missionary manages to visit only once a year.

What are the projects for the future?

In general, they can be summarized in the three nuclei that we are deepening on the journey of the GC28:

-       help every Salesian to be decisively and vitally among the young, to offer proposals of true meaning and, at the same time, to promote their protagonism, accompanying them and allowing themselves to be accompanied by them. Make a real and decisive choice for the last;

-       bet on a truly transforming and apostolic formation (initial and permanent), unifying and not "collegial", embodied and as community, personal and jointly. Finally, a formation that bets on daily life illuminated by the Gospel and our charism as the main resource;

-       continue to promote a shared mission with the laity (and with young people), which concerns both the plan of Don Bosco's dream of a “Salesian Movement” and that of the educational and pastoral challenges of these times.

It is difficult to answer, the reality is extremely varied ... In any case, I am struck by their ability to appreciate and foster their roots and to have them very present. It is something that Pope Francis appreciates very much.