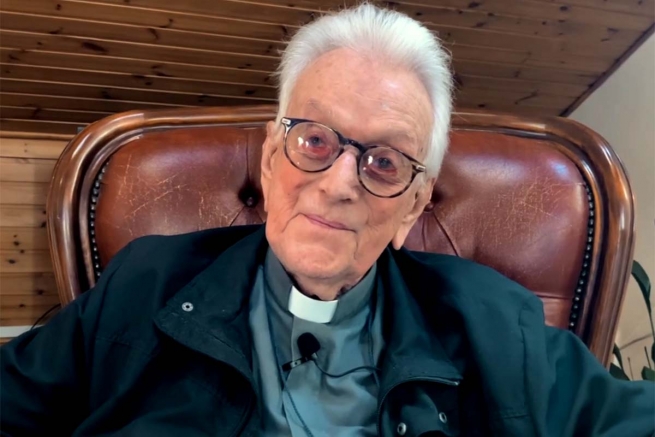 (ANS - Potenza) - One hundred years well spent, with numerous successful paths and many anecdotes to be shared. But above all, a hundred years of life given to others. They are those experienced by the Salesian Fr Bruno Bertolazzi, who passed from the military uniform, worn during the Second World War against the Nazis, to the “Don Bosco uniform”, in the service of young people and the Salesian Congregation. Today he resides in Potenza, still concelebrates Mass and uses Facebook to keep in touch with the many past pupils who still seek him.

Born in Carpi, in the Modena area, to "a silk industrialist and a teacher, as was the custom in good families at the time", he soon moved to Treviso. After the Classics-based secondary school, he enrolled in Law in Padua. He graduated with the rank of Sergeant, as the war broke out and he took the course as cadet officer in Naples.

Having become a lieutenant, he was reached by the news of the armistice while serving in Trani, and took part in the battle of Montelungo (December 1943), the first in which Italian soldiers fought alongside the former Nazi ally, forcing them to retreat.

A number of transfers, always in the center-south. Then Naples and Torre Annunziata to assist a major who takes a liking to him. And there comes his vocation, going to a game at the Salesian oratory: “I liked the environment. The match did not take place, because it rained, and the group of Salesians took refuge in the church. It was the month of Mary Help of Christians. I liked the songs. I went back the next day, and the next day. I chatted with many young Salesians and I said to myself: it could also be my life. Love broke out then and there.”

He already had a clerk job ready in Treviso, where his mother wanted him close to her. “But Don Bosco prevailed. And this is my life: Salesian.” On 20 December 1952 he was ordained a priest in Soverato. “And my mom came and made peace with the Salesians. She was very well received, hosted in the institute. The Director made her say 'goodnight' to the boys. In short, he created a family,” he says using an expression that is both a goal and a way of understanding life.

After Theology, he returned to the University again for a degree in Philosophy, to be able to teach. And the transfers for the various offices he is called to carry out in the Congregation begin again: Soverato, Taranto, Brindisi, Bari, Corigliano d'Otranto, Naples, Castellammare, Lecce… Without forgetting the six years as Director of the Generalate in Rome: “There were 92 confreres of 20 different nationalities”, including the Rector Major Fr Egidio Viganò. “There is a photo in which I am sitting in his place,” he recalls, laughing to himself. He too remembers the last few hours moved emotionally, while holding his hand.

At the age of 80, he is still very active: he is sent to Potenza and takes up the post as assistant to university students. The office in Potenza is the longest of his life. “But now I think I have no other transfers,” he laughs.