Ecuador – Diego Barrezueta: after a year of volunteering, his dream is to follow in Don Bosco's footsteps 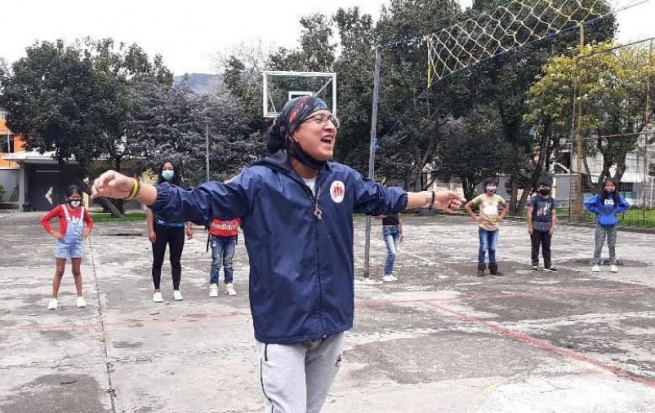 (ANS - Guayaquil) - Diego Barrezueta is a 22-year-old from Guayaquil who likes to help, share and teach what he knows. During his time in the oratory, his interest in volunteering was born as an animator. “It was God and the children I spent my time with that motivated me,” he says.

But it wasn't all easy: before leaving as a volunteer, you need to do some training. So, in February 2020, Diego went to Cuenca for the pre-volunteers meeting, without imagining that the Covid-19 pandemic was about to strike. Thus, his plans fell through the following March; due to the national lockdown, he had to stay home.

This situation made him doubt he had made the right choice, as he had also quit his job to volunteer and could no longer help his family. Eventually, however, he knew he could start his own business, even though he would have to continue training digitally.

And in the same way, the first times of volunteering were "remote": the community "Casa Don Rua" in Quito was his destination, and Diego kept in touch with his community, attended Mass, prayed and, in the meantime, helped his parents inside the house.

Last July, finally, he was able to go to Quito to start volunteering in person. But even then, things were not easy: he was the only volunteer and with no one else to guide him, he had to learn everything by himself. After being there for a week, he suffered a crisis again, and wanted to go home, because he didn't want to live his volunteer period in that way.

When the pandemic situation in Quito began to improve and the "Iñaquito" Reference Center re-opened, three times a week, Diego finally began to go there and animate the children of several needy families with all the necessary health measures in place.

So things started to change for Diego. He met many of the families of the children he helped, saw how the children lived, the situations they faced and the reason for their acting and living as they did: most families did not even have enough to eat.

When he started volunteering Diego was thinking of studying gastronomy later. But helping people and being around children and young people made him really happy, and then he remembered a piece of advice he had received: "If you are doing something and you are happy, you are on the right path."

After several years, he asked himself: "What would have happened if I had entered Salesian formation?" And now he has decided to take this path.

Even if his parents didn't agree at first, now Diego shares what his father told him: "If you decide to get into something, don't leave it halfway; finish it".