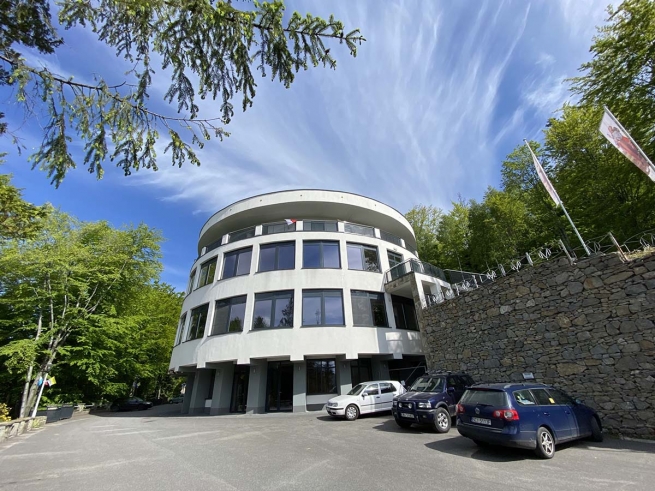 (ANS - Szczyrk) - On 5 June 2021 a new building for the Krakow Province (PLS) was inaugurated and blessed: "Dom Rekolekcyjno-Wypoczynkowy dla Młodzieży Górka" (Retreat and Recreation House for Youth), located in Szczyrk, in Southern Poland. Presenting it today is Fr Gabriel Stawowy, Economer of the PLS Province and the intitiative's principal Coordinator.

How did the inauguration ceremony take place?

The inauguration and blessing were also an opportunity to thank the benefactors and builders of the work. Also, the event coincided with the Congress of Salesian Cooperators that began on Friday 4 June. Thus Salesian Cooperators, Directors, and heads of Salesian institutions, benefactors, entrepreneurs, planners, architects, and promoters of the new work all met for the solemn inauguration, which included a performance by the mining orchestra of Katowice and Mass presided over by the Provincial, Fr Marcin Kaznowski.

Then followed the official cutting of the ribbon by the city mayor, Mr. Antoni Byrdy, and the blessing of all parts of the building. Then, in a new classroom, the history of the construction of the structure starting from 2015 was presented and a promotional video of the Center made by “Art 43”.

The construction went through several stages. When did it all start?

The first phase of construction, which involved the renovation of the residential part, was carried out in the 1980s. The next phase concerned the expansion of the structure and took place after the 2013 Provincial Chapter, during which the investment priorities of the Province were set, including the restructuring and further expansion of the Szczyrk structure. The renovation and reconstruction of the first part were carried out at the turn of 2014/2015, and from August 2015 the structure was expanded, which included the construction of 4 floors, with a bar, canteen with equipped kitchen, chapel, classroom and 6 rooms for the confreres and a community room. Today the new house in Szczyrk can now welcome and accommodate nearly 100 people. The expansion lasted six years, as every year we worked as much as the financial resources allowed.

What is the purpose of this new work?

This Szczyrk Retreat and Recreation Center is above all a place for young people, where they can participate in retreats, training courses, meetings, and rest and regain strength.

Who do you have to thank for this new center?

Starting with the general contractor and at the same time the sponsor - Anna and Zdzisław Bik's company - "Karbon 2", we would like to thank all the companies involved. Our gratitude also goes to the benefactors, the architects, the construction management, and the Salesians themselves, whose contribution has been invaluable.

It wasn't easy to carry out the work in times of pandemic ...

As Provincial Economer I had been coming to Szczyrk almost every week since 2014. Fortunately, the pandemic occurred during the building acceptance phase by the competent authorities, so it wasn't much of a bother.