Vatican – Amid play and reflection: “no to racism” and “care for Creation” at center of Vatican's "Youth Summer Camp" initiative 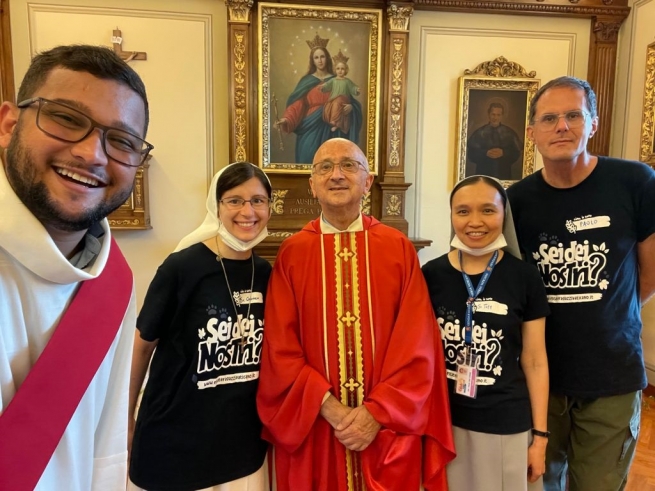 (ANS - Vatican City) - Their best wishes to Pope Francis during the recent period of his stay at the Gemelli hospital were among the most touching and affectionate. In a video they "sang" their closeness and their encouragement, assuring him: "You are always a great friend to us and we want to be with you soon." There are 185 children, aged 5 to 13, participating in the "Youth Summer Camp" in the Vatican until 30 July. Fr Franco Fontana, chaplain of the Pontifical Gendarmerie and Director of the Salesian community in the Vatican, explained the meaning of the initiative to L'Osservatore Romano.

How did the idea of ​​the video greetings to the Pope come about?

It was the kids themselves, together with the animators, who produced this three-minute film entitled “Forza Francesco”, where they say: “Don't worry, we are together in this fight with you”. The song "Forza Gesù" by the Piccolo Coro dell Antoniano was used as a basis, to which Fr Wellington Abreu, a Brazilian Salesian, and Carlo Patanè, added new words. The video was recorded in the Paul VI Hall.

How has the experience changed this year due to Covid-19?

We structured the initiative starting from safety protocols that provide for a series of measures for children and operators. There is more attention than in the pre-pandemic, but the spirit has remained the same, that is, to build an educational and proactive environment of Christian values ​​with the children.

How much space is reserved for play and how much for reflection?

They are both pivotal moments. The playing, mainly non-competitive, is concentrated in the morning, while in the afternoon, between formation inputs and group work, we dedicate an hour and a half to transmit a variety of positive messages such as care for the environment and a radical no to racism. They are engaging activities expressed with a language within the reach of children, which also includes multimedia, theatrical or musical exhibitions.

Who are the educators?

The animators are young adults who come from different life experiences and who have discovered the propensity to work with younger children. They come from parishes, Scout circles or the world of school. With different skills, we have built a close-knit and enthusiastic group. Like last year, coordination is entrusted to the Salesian community in the Vatican, together with the company "Play It" with the animation agency "Tutto in una festa".

What differentiates the Youth Summer Camp in the Vatican from normal summer camps?

Acknowledging, however, that even the summer camps in general are careful to offer constructive experiences, this "Summer Camp" has the privilege of taking place in an exceptional setting. The support of the Holy Father is so strong and encouraging: we truly feel him as one of us.

How much was inspired from Don Bosco for the initiative?

Don Bosco was courageous to the point of recklessness when it came to starting a pastoral work from scratch, as long as he was sure that boys or girls would benefit above all from a spiritual one. The guiding principle is the same for us too.