Japan – Cl Abuto, SDB: “God has called me to serve Him as a religious and as a missionary” 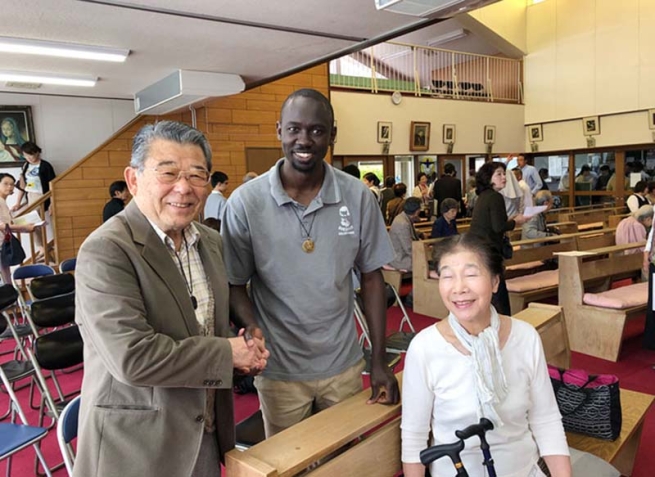 (ANS – Miyazaki) – The Salesian Congregation is missionary by charism and Salesian spirituality is something that allows you to find a family environment even at a distance of thousands of kilometers from your home. This is the conviction of the young cleric Joseph Abuto, who left with the 148th Salesian Missionary Expedition (in 2017) from Kenya to Japan.

Tell us something about your journey of faith?

My vocation and missionary discernment have one thing in common, they are both based on the same source or rather they developed parallel to each other. Far before setting my foot in a seminary, when I had already felt that God was calling me to serve Him as a religious, the desire of being a missionary was already born within me. I grew up in an environment surrounded by missionary congregations, let alone the fact that my own parish was run by Comboni Missionaries. I grew up knowing Benedictine’s missionaries, Augustinian missionaries and Mother Teresa missionaries.

Being brought up in a staunch Catholic background, my father was a catechist and my mother worked as a cook in the parish for the priests, I had the inclination of one day becoming a priest following the example set by those missionaries that I came across from different countries. Seeing them struggle with the culture and ultimately embracing it and living it with ease and joy was a great source of inspiration to me.

And discernment of your missionary vocation?

I joined the Salesians on 24 April 2010, I did my aspirantate for two years, the pre-novitiate in Bosco Boys, Kuwinda-Kenya and then novitiate in Morogoro, Tanzania. In my second year of post-novitiate, I wrote my application to the Rector Major expressing my desire to offer my life as a missionary ad gentes. The following year in June I received the biggest surprise that has ever happened in my life so far: an email from the Rector Major affirming that I will be joining the province of Japan. And I travelled to Rome on 27 August 2017 for the 148th missionary expedition.

Are you still supported by your mother province, AFE?

My mother province will always remain in my heart, mostly because of the initial formation that she has imparted to me. The Province that has made me the Salesian that I am now. At the mission level, I appreciated in my home province especially the professionalism of youth ministry in the schools, colleges and in the sector of social communication. In this way, the Province can reach the young where they are and build a strong and effective growth of the charism.

What is your Missionary Experience in Japan?

In these four years that I have experienced as a missionary, I can’t say that missionary life is either easy or difficult. Yes, Salesian spirituality is one and the same all over the world. So it’s easier to enter into the culture of the young whom we are sent to and wherever we are sent, albeit challenging.

Upon my arrival in Japan, I spent one year in Tokyo-Chofu community. During that time I was assigned to a group of Filipinos. With them, we had a meeting every Saturday to share the Word of God, pray the Rosary and have Adoration. Alongside this group, I also joined the Oratory on Sundays. Here it was a nice experience working with lay people of Japan. It was an opportunity to practise the language as I mingled with the children and the parents who were really welcoming and couldn’t hide their happiness for my presence in their midst.

After one year in Tokyo, I was sent to Yokkaichi Junior Aspirantate to begin my practical training. In our Aspirants, there are high school students with the aim of joining the congregation once they graduate from their senior high school. It was an enriching experience being with them and doing different activities together. Since they are treated as aspirants, they live our life of prayer as Salesians joining in morning and evening prayers, adoration, recitation of the rosary and daily mass. We enjoyed various sports together and we had numerous outings to refresh our minds and change the environment. Before the pandemic, we could go to different parishes for catechesis classes which they would animate prior to them being prepared in the community. Once a week I had English class with them.

Currently, I am in Miyazaki, the first Salesian house in Japan (1926), located in the southern island of Kyushu, with a Salesian junior and senior high school (Hyuga Gakkuin). Apart from assisting in English classes, I join the club's activities in the evening, playing soccer with them twice a week and basketball once a week. On Sundays, I join the parish run by the diocesan for mass and Sunday school.