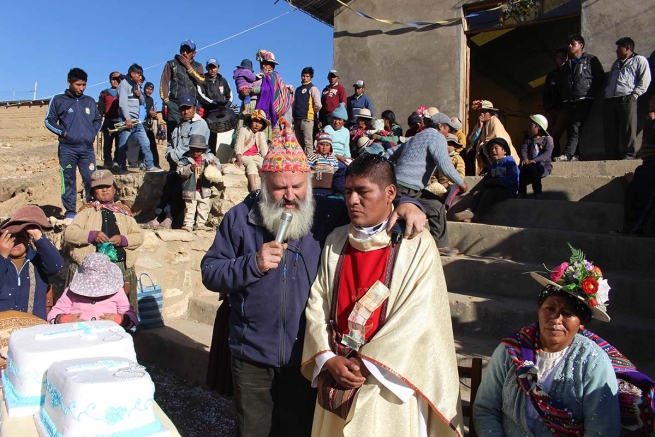 (ANS - Kami) – Fr Serafino Chiesa, an Italian Salesian missionary, arrived in Bolivia in the mid-1980s, to find one of the world’s poorest populations, and he has been helping the development of over 100 rural communities for 24 years. He carries out his mission in Kami, a mining center at an altitude of between 3,600 and 4,500 meters above sea level.

When and how did you arrive in Kami?

I arrived from Italy to the Kami mission on 2 January 1985 to help and offer my support in this remote area, complicated because of the altitude. I was not ready to leave as a missionary, but I accepted the proposal of my Superiors. The time had finally come to make my contribution.

What was the Kami community like upon your arrival?

In those days, the roads were terrible, landslides were constant, and the nearest town was many hours away. Another striking issue was the situation of the children who had nothing to protect themselves from the rain and cold. Now the situation is very different, there is no comparison with those years.

What is the social impact of the Salesian presence in Kami?

One of the first effects was the presence of priests who visited families and ensured the celebration of the Eucharist.

Social works began almost immediately after the arrival of the Salesians, such as the aqueduct, which is considered a monumental work. There are 7 kilometers of pipes along a very complicated mountain range. Water has been brought to Kami in large quantities, although it is still insufficient due to the large number of miners.

We also managed to organize better health care with the help of the Italian NGO "COOPI", and we also strengthened the schools in the area, because there was a high percentage of school dropouts.

Other important works were the construction of the hospital, the gymnasium, and the cinema in 1984. These are social works that have had a strong impact on the population of Kami and have created a relationship of esteem with the Salesian community.

What can you tell us about the hydroelectric plant?

The project is truly huge. The first phase was completed back in 2007, now we are in the third and final phase of the project, to be completed for the construction of the plant, which will provide electricity to the entire region and may be able to expand a bit more. Under the project, the excess energy will be sold to the state and the income will be used to support all the activities of the Salesian mission in Bolivia: supporting Radio Don Bosco projects, agricultural projects, maintaining roads, which is an important part of village development...

How did the production and selling of meat begin?

This initiative was born about 25 years ago, starting from an agricultural project that sought to improve the quality of life of the people by improving the quality of potato seeds, and that continues to this day. In those years, when there were no veterinarians in the area; training agricultural promoters became a necessity. We started training pig farmers, as families already all owned pigs but were neglected and sick, and we were able to make small pig farms in good hygienic conditions. With this input, over time we managed to produce serrano ham and chorizo, and I can say that we have managed to produce the best serrano in Bolivia.

What are the biggest challenges for Kami and the Salesian work in the future?

To continue with the projects we have, as economic self-sustainability is still a key challenge.