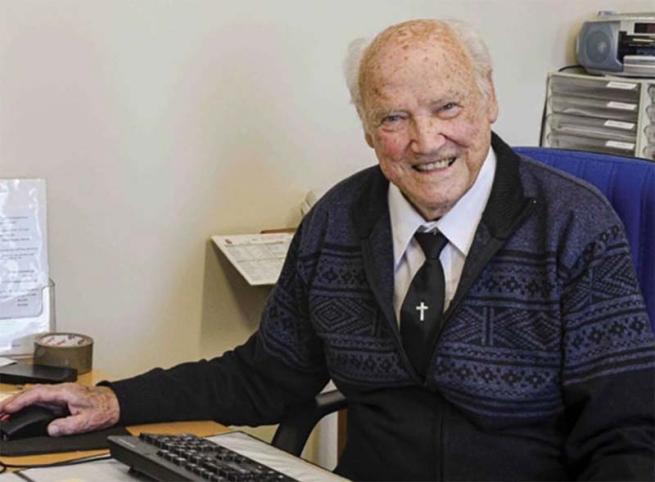 (ANS - Melbourne) – Highly esteemed priest, teacher, and journalist. Thus, in a nutshell, the mission of Fr. Frank Freeman, an Australian Salesian of almost 91 years of age, but without forgetting the task he has been carrying out for a good 39 years, and which fuses together a bit all three dimensions of his being and acting: Director of the Salesian Bulletin of his country. Today on ANS he tells us a little about himself.

Fr. Freeman, can you introduce yourself?

I was born on September 11, 1931, in Ararat, a Victorian town 200 km west of Melbourne, to children of Irish immigrants. My path to the priesthood is really a long story and involves a significant geographical error on my part. At the outbreak of World War II, I was told that I was destined for a boarding school from a choice of three, among which there was one called "Salesian School." I mistakenly thought it would be in Sale, the capital of Gippsland, and just up the road, so I immediately chose that one. To my youthful surprise, I ended up at the Salesian Agricultural School in Sunbury, north of Melbourne.

How was your vocation born?

Thus, due to a geographical error, I came into contact with a Salesian community for the first time, which included an English Rector, two Australians in formation, and Italian and German priests, at a time when the homelands of these men were engaged in a deadly conflict. Yet, they were so united in caring for each other and their students, to the point of sharing their rationed food with us, so that we had enough to eat.

As time went on, we all came to admire a group of men whose life fraternally testified to all that is of evangelical value. They also often spoke to us of St. John Bosco, who devoted his entire life to creating a better world for young people. Such was the strength of that testimony that later four of our group, myself included, returned to join them as Salesians.

How did the Salesian "career" unfold?

After my studies and ordination, under God's blessing and grace, I lived and enjoyed a life enriched by three "careers": the priesthood, school administration, and journalism, where each enriched the other two.

My priestly ministry for over 60 years has been primarily in the Salesian pastoral care of the teachers, students, and alumni of the six boarding schools of which I have been both Community Director and Dean of the boarding school.

With the titles of Principal, Rector, and Prefect of Studies, I spent 40 years leading school communities throughout Australia.

Journalism: after I was appointed editor of the Salesian Bulletin, I joined the Australasian Catholic Press Association (ACPA), wrote reflections for various Catholic newspapers and magazines, and participated in ACPA's annual conferences.

How many years have you been Director of the Salesian Bulletin?

I have been Director of the Australian Salesian Bulletin for 39 years, bearing this responsibility during my long years of teaching. When, in the early 1980s, the then Provincial proposed this mission to me I was happy and eager to do it, knowing that the Director of the first Salesian Bulletin was St. John Bosco. And despite the years, renewal has been continuous through the recruitment of new members and expertise in the editorial staff.

What to say now about your vocation?

At 90, as I wait for His second call, with a firm and steady will, I serve God in the way and places He has already called me.