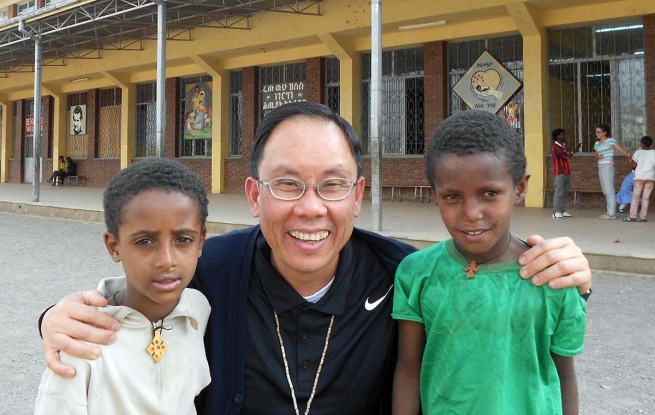 (ANS – Roma) – Don Bosco is a universal saint and no one who has had the opportunity to get to know him or his personality can remain indifferent to him. From the young people of the first Oratory at Valdocco to the youngsters who today attend the countless Salesian works scattered across five continents, everyone has their own special relationship with the Father and Teacher of Youth. For this reason, in view of the 207th anniversary of Don Bosco’s birth, next 16 August, we asked the members of the General Council to share with us who St John Bosco is for them. Opening this cycle of interviews today is the General Councillor for the Missions, Fr Alfred Maravilla.

Who is Don Bosco for you?

For me Don Bosco is a role model who lived his life to the full for the salvation of the young. He is a figure who constantly challenges my way of thinking and living, which must be, like him, always oriented towards the young, no matter what kind of service we do in the Congregation.

How did you know him?

My cousins studied at a Salesian school, the one in Victorias, Philippines. When I was preparing for secondary school, my parents wanted me to attend that school because it was known for its technical education. I wanted to study elsewhere, where my friends were. However, I followed my parents’ wishes. From day one, I felt "at home". I was so surprised to see the priests and brothers playing with us in the playground

Why did you decide to be a Salesian?

I was very struck by the Salesian education system. So I joined one of the youth groups. Then the Salesian who was leading it invited me to become a youth centre animator, and from there everything else followed.

What was your vocational path?

I enrolled at the ‘Don Bosco College’ in Canlubang, Philippines, to pursue a degree in Education. It was what today we would call a ‘university aspirantate’ and which eventually led to pre-novitiate for those who chose to become Salesians.

It was the time of ‘Project Africa’, but Fr Viganò asked our Province to start a presence in Papua New Guinea. So during the last year of my post-novitiate I applied to be a missionary in Venezuela. Obviously they accepted and sent me... to Papua New Guinea!

I have been there since 1985, for the second year of my practical training. I did three more years of practical training. The missionary vocation for me is the greatest grace. I don’t know if I have ‘converted’ anyone. But yes, being in another country, with another people, in another culture has marked me profoundly throughout my life.

Has anyone been a new ‘Don Bosco’ for you?

I would say all the Salesians I met, in their uniqueness, because they reflected an aspect of Don Bosco. But one who touched me deeply was Fr Alfredo Cogliandro, my Novice Master. Originally from Genoa, he was a missionary in Northeast India, appointed Provincial for 12 years in San Francisco, USA and became the first Provincial of the Philippines. A man of God, with a missionary heart.

What are the characteristics of Don Bosco that you most admire?

Obviously for me, it is certainly his missionary zeal!

In your opinion, young people can still find inspiration in Don Bosco?

The person of Don Bosco and his Preventive System are very relevant for everyone, even today.

In what ways can Salesians be new Don Bosco for young people?

Being among young people, rediscovering and living what our Rector Major calls ‘the Salesian sacrament of presence’.

And how does Don Bosco inspire your work as Councillor for the Missions?

As Councillor for the Missions I always have before me Don Bosco’s passion for evangelisation, his unquenchable desire to reach out to young people in the peripheries of his time - Patagonia, the Americas -, his missionary heart that always looks outwards.

If you could meet Don Bosco, what would you like to say or ask him?

My prayer to Don Bosco, every time I visit his relics in Valdocco, is always the same: “Don Bosco help your Salesians to rediscover the passion for evangelisation. Intercede for your Salesians so that they may keep the missionary ardour ever burning in their hearts”.