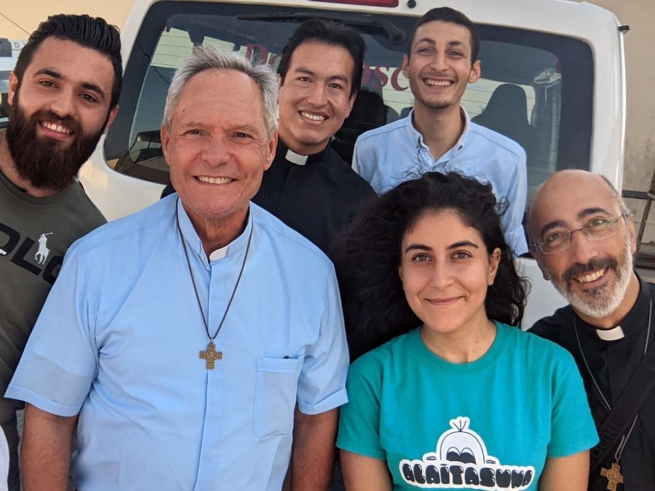 (ANS - Rome) - With the celebration of the 207th birthday of the Father and Teacher of Youth just four days away, we talk to the Councilor for the Mediterranean Region about his personal relationship with Don Bosco.

Who is Don Bosco for you?

The Father and Teacher of the young; the saint of optimism, joy, and celebration; the man of God who lived as if he saw the invisible; the priest committed to his young people until his very last breath; the educator with a passionate heart lit by the fire of pastoral charity... Our Model, as Article 21 of our Constitutions says.

How did you come to know him?

I was born in Burguillos, near Seville, and I am the eldest of six children. A simple, happy, close-knit family. My parents taught us to help others, passed on Christian values and love for Our Lady of the Rosary. In 1970 I entered the Salesians in Utrera. I had to take an exam to get a scholarship and providentially passed it. I will always be very grateful to my childhood teachers in Burguillos. At that time, it was practically the only chance to study, and had it not been for the scholarship, I would never have been able to go to Utrera. Even with the scholarship, my parents had to overcome many financial difficulties, but they chose the Salesians in Utrera over any other option because they believed it was the best for me. This is how I came to know Don Bosco and Mary Help of Christians.

Why did you decide to become a Salesian?

Deep down: because I believed that this was and is God's plan for me. I sensed some signs: as soon as you cultivate the Christian life a little bit and allow yourself to be challenged by Jesus, you feel an inner restlessness to do something more for others, you feel attracted or at least interested in that life, you find out who Don Bosco is and you feel fascinated by him... So, the question and the desire arose in me. I understood that the fundamental thing about a vocation is not "reasoning about it," but "accepting it and fulfilling it"; and that God does not want "supermen." In short, it is a grace to which I continue to try to respond every day.

What was your vocational journey?

I was 10 years old when I arrived in Utrera and spent seven years there in the boarding school. The first thing that attracted me was the Salesians. I saw them as different; they were special religious, cheerful, close, caring for us, playing with us, and at the same time demanding. Later, I learned about Don Bosco's life and began to understand why the Salesians were the way they were. When I was a child, I was struck by so many anecdotes and feats, the miracles... Then I began to understand a little bit more about his spirituality, which was very simple, his work spread all over the world, but especially his sense of celebration and joy: we were told that holiness consists in always being cheerful. When it came time to decide on my future, I felt within me the restlessness of the call to be a Salesian. During a retreat, I came across this phrase, "The happiness of many depends on your yes or no." And I decided to say YES to the Lord. That is how I began my pre-novitiate and have continued to this day.

Has there been any person who was a new "Don Bosco" for you?

I was fortunate to meet many people along my path who helped me discern, who encouraged and supported me. In my novitiate year and then always as a spiritual reference point, there was my novice master, Paco Alegría. Then, in the post-novitiate years, Paco Vázquez, who helped me ignite in my heart a pastoral passion for young people and who, when I was appointed, very young, Youth Ministry Delegate, opened to me an unsuspected and enriching Salesian horizon. In the two-year period, Alonso Vázquez: I never met a Salesian with such an immense heart and with more "pastoral intelligence" than him, the prototype of the Oratorian heart. During my years of Theology, Antonio Calero helped me form my priestly heart as a good pastor and taught me that it is important to be intellectually and theologically qualified to be able to respond to the challenges of young people. I will always be grateful, then, to Luis Fernando Álvarez, who taught me how to celebrate Mass; to José Antonio Rodríguez Bejerano, a colossal missionary whom I consider a true saint; to my dear soul friend and young priest who was soon taken to Heaven, Manolo G. Parra, an apostolic whirlwind with an extraordinary ability to attract young people.

What are the characteristics of Don Bosco that you most admire?

They are many because Don Bosco had an overwhelming and nuanced personality. Personally, I admire his capacity for personal love, even full of tenderness, for every young person; his ability to combine realism and magnanimity; his courage to dream; his grateful recognition of God who accompanied and guided his steps; his gaze of faith that led him to live "as if he saw the Invisible." The extraordinary and harmonious unity of his existence in the vital synthesis of "the sign of God's love for young people."

In your opinion, can young people still find inspiration in Don Bosco?

Absolutely, yes. Don Bosco continues to be a figure that fascinates so many young people and continues to capture their hearts. I just finished the Campobosco experience with about 800 young people from Spain and Portugal who visited the places of Don Bosco and Mother Mazzarello. Contemplating their faces when they visit these places and it is explained to them what Don Bosco lived through is an experience that confirms the fascination that he continues to arouse in so many young people who feel attracted to him; young people of this time, of this culture, with the interests and traits of this time, who are able to relate to him and allow themselves to be challenged, summoned, by him.

How can Salesians be the new Don Bosco for young people?

I am convinced that there is only one way: to be always in their midst, with a profound gaze or outlook of faith. What the Rector Major calls "the Salesian sacrament of presence." Of course, the circumstances that accompany every moment of our lives make the mode of presence different, but it is always presence. When we are not with them, when they do not occupy the center of our heart, of our mind, of our attention ... then our heart stops beating as Salesians and our vocation weakens. Meditating daily, or at least frequently, on Article 21 of our Constitutions, "Don Bosco, our model," will help us greatly.

And how does Don Bosco inspire your work as a Regional Councilor?

At this moment of my Salesian life, two things about Don Bosco inspire my attitudes in carrying out my service, even if I do not always achieve them; one is the sense of paternity that Don Bosco lived with such depth and concreteness; the other is the opening of horizons, both culturally and charismatically, to be able to look beyond our reality and go beyond our boundaries.

If you could meet Don Bosco, what would you like to say or ask him?

I would tell him that even today there are so many young people who are not happy, and I would ask him for a heart as big as his and a wisdom and pastoral intelligence like his to be able to help so many young people today who are lost and excluded from true and authentic happiness.