Ukraine – Fr. Ladnyuk, SDB: "We must help people and show that, through us, God does not abandon them" 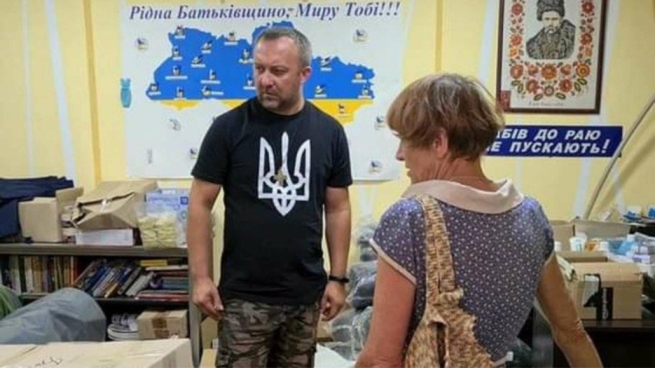 (ANS - Kyiv) - Saying Mass, doing communion, and confessing soldiers and civilians while all around there is war with its load of suffering and death, is not easy; but a priest sustained by faith, community, and charism is also called to face similar challenges. As does Oleh Ladnyuk, a Salesian, teacher, and military chaplain since 2014, who talks today about the hard experience of war, what drives him and what helps him from his past experience, and also the "miracles" he witnesses whenever he managed to escape death under the gunfire and shelling.

It is love that drives a priest to be and remain in this situation; having experience in the military also certainly helps, because," he says, "danger is everywhere and you need to understand the psychology of those beside you in order to help the soldiers and not, instead, be in the way. And then you need a state of mind ready to see death and suffering, winning over yourself, without sinking into pain, rather trying to establish a good relationship with everyone. Salesians are facilitated in this, explains Fr. Ladnyuk, drawing on his experience in oratories in Italy as well. Indeed, it is here that one gets used to meeting everyone without distinction.

"Salesian formation has helped me a lot: the experience of the oratories gets you used to relating with people of all kinds; then, a good habit of the Salesians is also the physical fatigue, which in war doesn't hurt, and also the psychological training we are used to. This is our preparation," he says. "But there is no shortage of challenges, first of all how to overcome suffering. They ask me," he confesses, "'How do you keep your faith?' And they tell me they see God in me. For me, that is the challenge."

A great support for those, like Fr. Ladnyuk, who work in theaters of war, is knowing that one is not alone, but that there is a community that prays, that hopes, that helps him. "They call me, they write me even from Italy," and the miracles of prayer can be seen, at least in the many times he has been saved under fire and the din of bombs thanks precisely to Mary's protection.

What is the most important commitment today? The ministry calls Fr. Ladnyuk these days to say Mass, hear confessions, distribute Communion, more in the rear than on the front line. Then there is the requested activity in hospitals and villages, where there are still many civilians left, and there are always those who want to expatriate. In all his activity he calculates that he has helped at least 500 people escape, but it could be many more, partly because, he recalls, in the early months "I was loading my minibus with many, many people and I didn't count them."

On his relief trips, Fr. Ladnyuk cares for and about everyone: he brings food and medicine to the people left behind in Ukraine to suffer, delivers aid to hospitals where the wounded are being treated, visits the military, and even transports food for the many pets that were abandoned during the war and are now being cared for by those who had compassion and picked them up.

The most touching and difficult experience was taking children away without their parents, "They entrusted them to me because they trusted me and wanted me to take them to safe places." Fortunately, today they have all found each other.

Then the experience with young people," he adds further, "is the most difficult, but also the closest to Salesian spirituality. When they come away they don't feel like talking, and I respect their silence, then when they enter our Salesian home, the barriers fall and they cry with me."

"We priests always remember that Jesus was always with the last, the poorest," the Salesian concludes, "And if we have the possibility we must help these people, even if they are not our parishioners we must show them that, through us, God does not abandon them; we must give them hope.