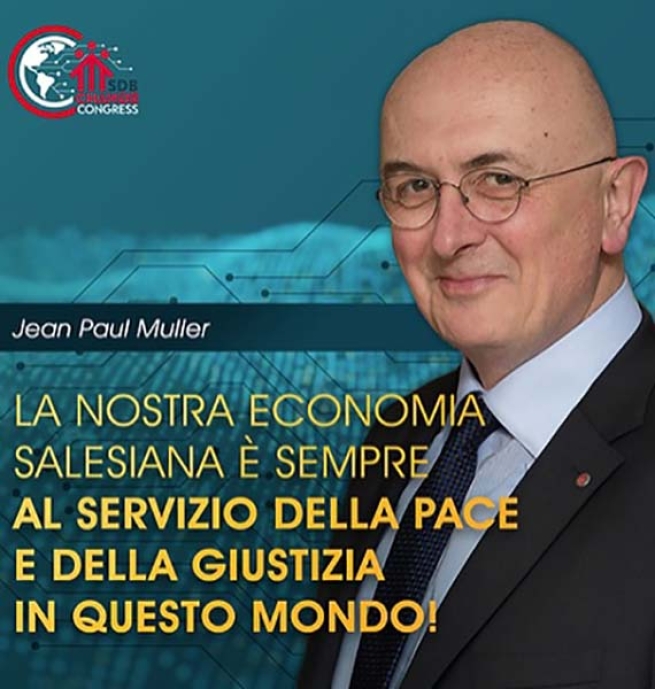 (ANS - Rome) - With only a few days to go before the great event "SDB Change Congress" (Sept. 19-23) that will draw Provincial Economers and staff of the Planning and Development Offices (PDO), Mission Offices, and Salesian NGOs to Rome, Br. Jean Paul Muller, SDB, Economer General of the Congregation and promoter of this initiative, explains the event’s origins and objectives in detail.

The SDB Change Congress, from its very title, focuses on "change." Why and what needs to be changed?

All life is always a continuous becoming, but here we want to talk about some big changes that we cannot ignore because they have a direct influence on our lives. I'm thinking of the pandemic, the war, and the major geopolitical changes taking place... In the economic field, the power of money has grown yet again, and not only traditional currencies, but also digital currencies, bitcoins, or the forms used in the "dark web," which we don't even know about.

Then there are other changes that affect us even more closely, as Salesians: our vision of the "honest or upright citizen" today is that of the citizen who gives his or her life to fight mafias or who is committed to the real respect for Human Rights. All this also requires, on our part, to make more courageous choices and a greater commitment to political and social formation and the quality of education.

The Congress will address 5 macro areas (Sustainable Economy, Salesian Spirituality and Leadership, Artificial Intelligence, Communication of the Future, and Prevention of Corruption). How were they identified, and is there any priority?

Personally, I care a lot about the aspect of the spirituality of all those who work for and with young people; however, they are all important themes. Initially, we had identified other topics as well, but we chose these, almost three years ago, thinking about what may be most relevant to an audience made up mostly of Economers. The environment, for example, is a topic perceived as inescapable already in all the Provinces; Artificial Intelligence and Communication are areas that are in perpetual motion and with which we cannot fail to engage. The basic idea is that they are areas that are still open - I like to use the image of "construction sites" - realities where we do not yet have all the answers, or where we have the answers but have not yet had the courage, personnel or resources to put them into practice.

On several occasions, you have said that the SDB Change Congress has already begun. In what way?

When we convened the Congress, 14 months ago, at first there was a climate of general surprise because this appointment is an authentic novelty: it is the first time we are gathering all the Economers of the world; until now we had only had regional meetings or formation meetings for new Economers; moreover, in this circumstance, there will also be the heads of our Salesian NGOs, who will contribute by bringing their experiences and know-how. But during this time, a qualitatively fine dialogue has been generated among all - Provinces, Mission Offices, NGOs, PDOs... Then many proposals and contributions were submitted on the congress themes and yet other suggestions still, and we started to do what is actually one of the objectives of the Congress: to understand that we are a large network, called to work globally, at all levels, in administration, fundraising, evaluation...

What is the relationship between the SDB Change Congress (2022) and the "Energy Forever" Conference (2019) on green, clean and renewable energy?

That appointment gave a strong impetus to the Congregation on certain themes, of which now, despite the slowdowns due to Covid-19, we are already seeing some effects. For example, it brought to the 28th General Chapter the document on energy and the environment, in which it is written very clearly that we want to achieve very low emissions for the whole Congregation by 2032. A fruit of this is also visible in the refurbishment of the Generalate: we will be the first Congregation with a Generalate designed to produce as few emissions as possible.

The path following that congress is the one that we also envision fulfilling after SDB Change Congress: a path of dissemination and structuring of what will emerge at the congress.

What indeed will be the steps successive to the SDB Change Congress?

After the Congress is over, we will not simply say, "Go in peace." We will not have peace, because there is so much to do. The "building sites," as I said, will remain open. The Economers who will return to the Provinces will have to continue to improve the situation, raise the quality of service of the administration, increase transparency, fight corruption, knowing that they can also count on the contacts and information that will be shared at the Congress. Moreover, in the coming years, we will hold regional meetings on the issues addressed, and at the end, a comprehensive document with these reflections will be produced so that they may be discussed in the next General Chapter.

My hope is that with all this we will be able to bring a certain spirit and also a certain pressure to update or modernize the structures of the Congregation.

To conclude: the "Economy of Francesco" event will take place almost on the same days in Assisi, a gathering of young economists and entrepreneurs called to rethink the economy in a more Christian and human key. What are the convergences between the two events?

The coincidence of the appointments is fortuitous, because 'Economy of Francis' was postponed due to the pandemic. But I'm happy to see that the Pope wanted to carry out an operation similar to ours: to open a forum, where to discuss emerging issues, appeal to consciences, and invite people to actively participate to change life on the whole planet.

I have an enormous hope: that these young economists who now gather around the Pope, in the future, finding themselves in large companies, will sow the values of the Gospel and the Social Doctrine of the Church.