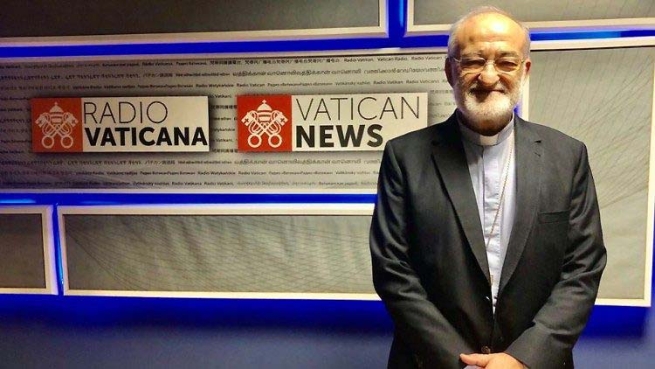 (ANS - Vatican City) – Spotlight on an interview with Salesian Cardinal Cristóbal López Romero, archbishop of Rabat, Morocco, who arrived in Rome on account of the canonization of Salesian Brother Artemide Zatti: interreligious dialogue is one of the fruits of the great event that took place 60 years ago and changed the face of the Church, he says. Pope Francis has given us a great impetus to continue on this journey.

A sunny smile is the first "word" the cardinal offers in his interview with Vatican News yesterday. The cardinal's gaze rests on two days. The first is last October 9, when the Church was enriched with two new saints with the canonization of Giovanni Battista Scalabrini and Artemide Zatti. The other is linked to Oct. 11, 1962, the day of the opening of the Second Vatican Council. Two moments, the cardinal stressed, etched in the history and future of the Church.

The bishop and the Salesian brother are both "men of charity." These two figures are a stimulus, for the whole Church, to walk the "path of charity." There is a path that opposes the "throwaway culture". This path, the Archbishop of Rabat emphasizes, is the "culture of encounter." "We Christians in Morocco, in the north of Africa, define ourselves as the 'sacrament of encounter': we try to promote the encounter between Christians and Muslims." "Living together, in friendship, is possible: let us fight together," explained Cardinal Cristóbal López Romero, "for a better world, let us build the Kingdom of God together. This is a message that the small Church of North Africa shares with the entire universal Church. "We are a small Church, insignificant, but significant, meaningful, because we have a message to transmit to the whole world."

Cardinal Cristóbal López Romero, born in 1952, was a child when the Second Vatican Council opened. "I was ten years old and in Salesian school, they explained the meaning of that extraordinary event for the Church to us." "Sixty years later," he underscores, "I am witness to all the positive changes brought about by the Council. Studying the history of the Church, it was pointed out to me that it took more than a century to achieve what the Council of Trent indicated. I think the Second Vatican Council," the Rabat archbishop emphasized, "still needs twenty, forty years" to be more rooted in ecclesial life along the line inspired by the Holy Spirit. "It is not easy, but Pope Francis is helping us to recover the Council." It is a challenge for every Christian and for all local Churches to put the Council into practice, which "is not a whim, or caprice, of cardinals and bishops, but a work of the Holy Spirit."

"Our Church in North Africa," the cardinal noted, "has put into practice the conciliar teachings on interreligious dialogue: after the Second Vatican Council, dialogue with other religions was initiated." Pope Francis "has given us a great impulse to continue on this path," and although "much remains to be done in this field" that of interreligious dialogue is an example of one of the fruits of the Second Vatican Council."

"Another fruit is that of an incarnated Church, of a Church that becomes truly Tunisian, Moroccan, etc. St. Paul said he wanted to be Jewish with the Jews and Greek with the Greeks." And yet another fruit, the cardinal then notes, is the "centrality of the Word of God." "We Catholics in Morocco, where we are a minority, can humbly be witnesses to the fact that the Second Vatican Council still gives us important guidelines today."