Great Britain – A conversation with the first Liberian Salesian 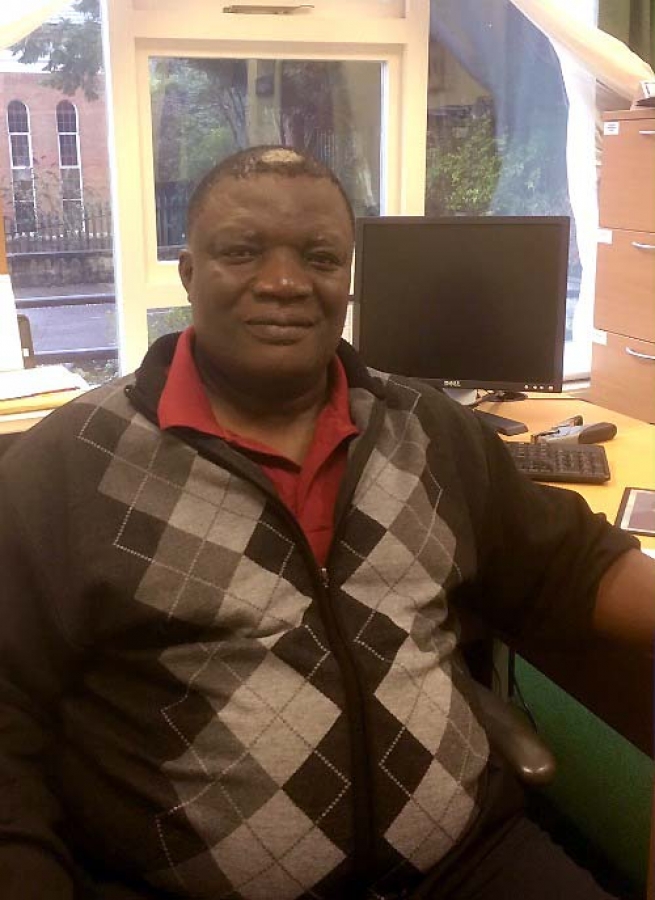 (ANS – Thornleigh) - When Fr. Blamoh Harris, the first Liberian SDB, paid a visit to Thornleigh Salesian House last week, it was an opportunity for those who had served in Liberia to recall their time there together, and also for Salesian Link to talk to Fr. Blamoh about his experience.

What about your Formation path?

My formation and training as a Salesian took place against the backdrop of the civil war in Liberia, and after eleven years in Ghana, where I was principal of Don Bosco Technical School Ashaiman, I’m about to begin my new mission as Parish Priest in Ondo, Nigeria.

At high school, I was very much involved in youth work in my home parish, and Fr Michael O'Leary SMA suggested that the Salesians and I might be right for each other. As a result, I moved to Monrovia and attended the Don Bosco Technical School, where I studied construction and carpentry, and first met British Salesians, including Fr Joe Brown and Br Donald Macdonald.

In 1984, there was no English-speaking Salesian novitiate in Africa, so I went to study in the Philippines, making my first profession on 1st April 1986. After studying philosophy in Lesotho, I returned to Liberia for practical training in 1989, shortly before the war began. As the Salesians were expatriates, they all had to leave, and I was effectively cut off from them, so I decided to return to my own diocese. For some time, the Salesians did not even know where I was, and it was Sean Devereux, who was then working for the UN, who helped us to reconnect. I then spent two years with the Salesians in Tappita, Liberia.

Liberia is now part of the Anglophone West Africa Province, along with Ghana, Nigeria and Sierra Leone, and the novitiate in now based in the Province. In 2015, a second Liberian Salesian, Fr. Albert Gibson, was ordained a priest, and there are around five men in formation.

Let’s speak about the school in Ashaiman, Ghana…

The area has many challenges and people live in significant poverty. In keeping with the Salesian charism to serve the poor and to be among them, Don Bosco Technical School was set up to provide education and vocational training to young men and women that equip them to find employment in local factories and businesses. The training offered includes auto-mechanics, accounts, secretarial and computing skills and electronics, and students can take qualifications to gain entry to higher education. The Salesians also operate ‘Don Bosco Reach Out’ a project supporting graduates of the school in setting up their own small businesses. During his time there, the school has grown from 350 students to 720.

In your new mission you will lead a parish of around 800 families in Ondo, Nigeria.

The parish has a big youth centre and a variety of activities for young people. There is a team of catechists and liturgy groups who set the theme for each year in liturgy and spirituality.

Which are the challenges of the AFW Province?

In Liberia, such as in Sierra Leone, people were just beginning to rebuild their lives after the war, when Ebola came along. Responding to people who have had their families wiped out can be challenging – trying to explain this in terms of a loving God – but I believe the most important factor has been that the people have seen the presence of the Church in their midst, in their suffering and their pain.

Many children were forced or tricked into taking up arms during the war, and as they grow up, the Salesians are supporting them in dealing with this aspect of their past. ‘Reconciliation through sports’ has proved a valuable approach in bringing together young people who have been badly affected by the conflict.

Things are now beginning to improve after the Ebola crisis, but poverty remains, and people sometimes find it difficult to balance their spiritual lives with meeting the very basic needs of existence.