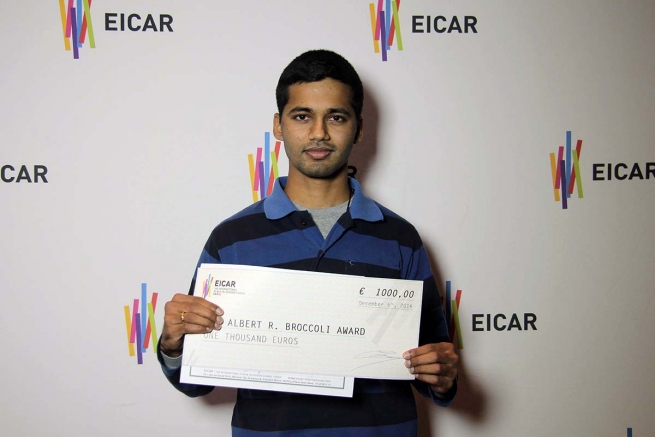 Albert R. Broccoli, the patron of the award, was an American film producer, co-founder of Danjag, LLC and EON productions and the noticeable producer of the JAMES BOND films. The awards were judged by a jury composed of Hollywood and French cinema celebrities. The ceremony of the first award for the short film was witnessed by Fr. Daniel Federspiel, the Salesian Provincial of France and Belgium South, some Salesians confrères and an audience of six hundred special film spectators.

What do you feel after receiving these three main short film awards as a priest in Europe?

I feel happy as a priest able to inspire mass audience in seven minutes and am convinced that God wants us to use the powerful means of visual media in a responsible way to love one another.

Can you describe your short film project?

The short film is about a humble janitor who unexpectedly becomes a hero in face of the violent terrorist attack at The Bataclan concert hall in Paris on 13th November 2015. It aims at bringing healing to the wounded and inspiring believers to love humanity. (Watch the teaser of ALIVE: https://www.youtube.com/watch?v=WtJKlH4bBys)

Would you like to state something about your team?

The team consists of members of my choice belonging to 15 different nationalities and representing Christian, Jewish, Muslim and Atheist backgrounds. I find the choice of the team to be an inspiration from Don Bosco who in his first oratory had collaborators from all religious backgrounds to work for the common good of humanity. This approach paved the way to the ALIVE crew members, an effort for a new way of relating to the world. The teamwork was the success of the film. (Watch the making of – ALIVE: https://vimeo.com/196256269)

What do you want to achieve in the visual communication media?

I want to inspire the world towards peace and healing and encourage living together as one human family.