Great Britain – Cardinal Bo's words of hope for the young 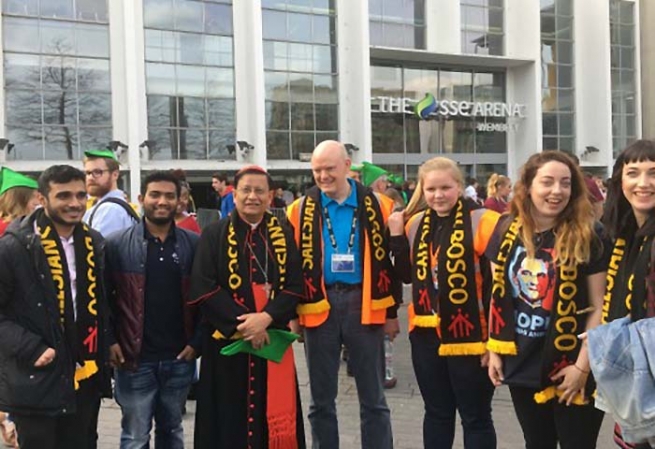 (ANS - London) – One of the many highlights of Flame 2017 (March, 11) was hearing Cardinal Charles Maung Bo, SDB, the very first Cardinal of Myanmar and a Salesian. At the end of the event, Salesian Link was delighted to spend a few moments in conversation with him.

Cardinal Bo began our conversation, of course, by speaking of Don Bosco’s devotion to the young: “Don Bosco loved all young people. He said that he loved them for the fact that they are young, but he especially cared for those who are abandoned and have lost all hope, and that is why he founded the Salesians.”

The Cardinal said that if Don Bosco had been at the Flame Congress himself, “he would impress on each one of these young people that he loves them in a very particular way. He would tell them that the love of Jesus will inspire them not to lose hope because of their surroundings, or the things that are happening in different countries. He would encourage them to keep their hope for the present and for the future.”

Concerning young people at the schools, parishes and youth work projects in the Salesian Province, he said that in Britain, many young people have freedom and opportunities, and he asked those who are more fortunate to "have a wider perspective: to have regard and concern for those people who have no hope, no facilities, no opportunities." He asked that "wherever possible, they could volunteer in those countries that are underdeveloped, and offer themselves to help the people."

Earlier, in his moving, inspiring - and often funny - speech from the platform, the Cardinal told us of his own experience of the difficulties of practising his faith under an oppressive regime, and spoke of the tremendous challenges the people of Myanmar still face, and the valuable work being done by Catholics for social justice. He thanked people in Britain for their friendship and support, and called on us to “help our country continue the pilgrimage of peace”.

"Everywhere that voices of hate are getting louder... young people especially, counter hatred with love. Evil expires but hope has no expiry date,” he said.

His message of hope was powerful, telling the thousands of young people present, "You are the youth, your name is Tomorrow," and urging them to "put your hands in God's hands and carry the flame of hope."

Urging us to take courage in standing against hatred and injustice, he quoted Don Bosco: '"If one is convinced his cause is just, he will fear nothing."

Gales of laughter accompanied his use of the poem “It depends whose hands it's in”, which he used in a very entertaining way to encourage faith and trust in God, pointing out that a tennis racquet in his own hands is worth very little, but in Andy Murray's hands, it's a different matter. He had us all joining in with the chorus' enthusiastically.

Every time he mentioned Don Bosco, or being a Salesian, hundreds of us in the Salesian contingent cheered till we were hoarse.

If anyone in the 10,000-strong audience wasn't a Cardinal Bo fan when they arrived at Wembley Arena, they had certainly taken this gentle, inspiring man, and his message of hope, to their hearts when they left.