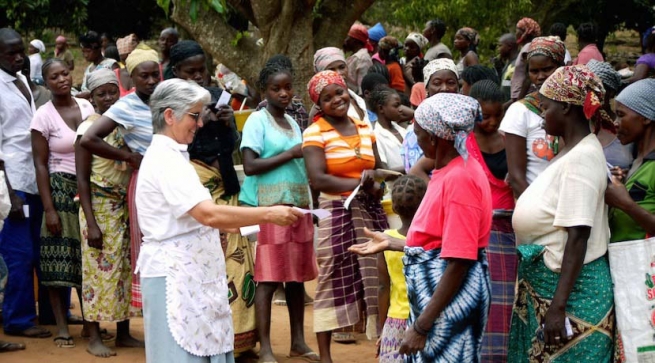 (ANS - Inharrime) - Sister Lucilia Teixeira Monteiro is a Portuguese Daughter of Mary Help of Christians (FMA). For 42 years she has been a missionary in Mozambique.  Since 2004 she has been working at Inharrime with orphaned children and young people who are being educated in the faith and for life. "Our children do not have parents, but they have found a family, they are happy to have us and we are happy to have them, because the Salesian life has meaning only because they exist," she says.

And she adds: "My mission is to participate in the growth and education of the girls who come in crowds to my centre in Inharrime. In addition to educating the smaller ones, we also have higher courses for teenagers, always using the Salesian Preventive System. (...) At this moment, we have 2350 children and young people ranging from first grade to pre-university; 120 orphaned children who are boarders, 720 orphans who are adopted in families, 25 children without a mother, and 18 albino children."

Along with education, the children and students of the Beata Laura Vicuña Centre of the FMA are introduced to faith through a coherent Christian witness. "We live what we are and we share it by all praying together,” says Sr Teixeira. The children already know how to pray. Many people come to the centre seeking help for their problems and the children pray for these intentions. We are small and poor, but the Lord knows how to reach wherever he wants!"

The reputation of the Centre is so good that some people invent tricks to get their children in. There is the case of three sisters, who, Sr Teixeira says, "were accepted among the orphans, even though their mother is alive. She is a widow living with a brother who is rough and violent.  She was afraid that he would hurt the children small as they grew up. So it occurred to her to pretend to be the aunt of the little girls and she asked us to take them. The two older ones had been instructed not to say anything about their situation, but the smallest one, when she saw her mother about to leave, cried out 'mommy, mommy'. In a situation like this, I could not deny them a place."

Today Sr Teixeira describes herself as "a missionary happy to have been called by God." She adds, "I thank him every day for calling me to give my life to Him to serve the poor. This is my mission for as long as God wills."