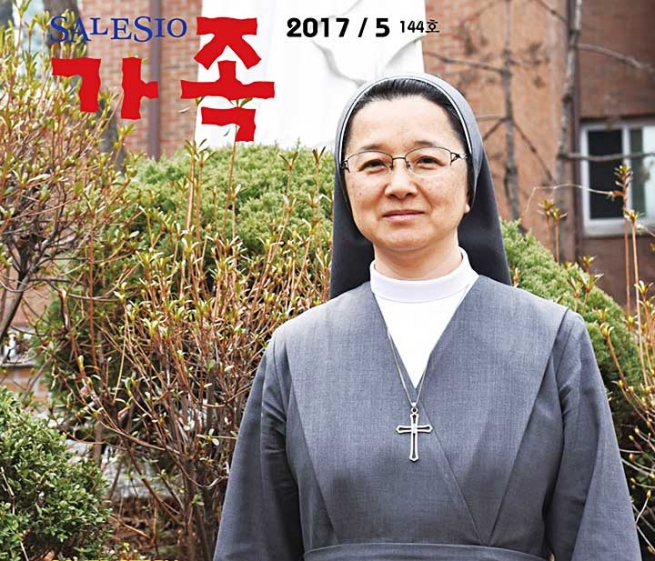 What is the charism of the Caritas Sisters of Jesus?

Of course, we find it in our Constitutions in a very detailed way. Our charism is about sharing the Love of God with the people. We know it through the first generation of Salesian missionaries in Japan – Fr. Vincenzo Cimatti and Fr. Antonio Cavoli. During the Mass for their missionary send-off, the third successor of Don Bosco Blessed Philip Rinaldi told them: “Japan is a developed country but the Japanese people don’t know yet about God. Their hearts can be touched only by the Love of God!” And the first Salesians did their best to put the advice into practice in their first mission, the very poor mission in Miyazaki. In the parish of Miyazaki the Salesians started a charity mission through family visits with the help of young ladies called “Sisters of Mary”. Then a “House of Salvation” was opened for homeless people where the first members of the “Society of Mercy” lived and served the poor. These are our roots. Through the practice of God’s Mercy and this life model many more young women were attracted to follow Jesus in our Congregation and this became our spirituality.

You are celebrating the 80th anniversary of foundation. How do you envision your future?

My dream for the Caritas of Jesus Congregation? It’s a difficult question. Although we don’t have a clear vision, we live faithfully on the journey indicated by God. As a Superior General I live always with an open heart trying to do my best. I’m always trusting in God, whatever may happen on our journey. During my term of service to the Congregation I do not wish to focus on some new or great external work that would attract attention in the world or in the Church. I’m happy even if some Sisters after my term of service would question: ‘What did we accomplish during Sr. Teresia Furuki’s term?’ I wish only to help each one of our Sisters to live with an open heart, fix her eyes on God and walk with Him joyfully to live our spirituality. This is my dream for our future, this is my most important mission as the Superior of our Congregation.

How has your vocation journey been?

I was born in Fukuoka, Southern Japan into a traditional Catholic family. Among 9 siblings, four are members of the Salesian family (elder brother SDB, elder sister CSJ – both already passed away and my younger sister – CSJ is a missionary in Bolivia). When I was five years old I met a sister in the hospital after a car accident of my brother. She invited me in a straightforward way: ‘Furuki, It would be nice, if you became a Sister!’ And my reply and promise was ‘Yes’. And from that moment on I have been trying to keep this promise. When I was in high school, I joined the Caritas Aspirants (grade 7). That Sister later became Sr. Apolinaris, former Mother General who passed away in 2015.

What was your personal feeling at the moment of election as Superior General?

On 30 May 2015 our former Mother General Sr. Apolinaris Yuriko suddenly passed away during her visit to Brazil vice-province. I was the Moderator of the General Chapter called for the election of her successor. I was very sure that I would be not elected, since I have not got the necessary qualities. After the election, I wasver afraid and would have liked to escape, since I had never imagined this situation. However due the prayer of many Sisters and with a faith in God’s Providence and Grace I accepted this service.

You served as the head of the Commission for the revision of the Constitutions. What are the most important parts of your Constitutions and Regulations?

Thanks to the help of many Sisters, and of Fr Midali, SDB our new Constitutions are close to the original version and renewed according to the present biblical, theological and ecclesial vision. It was a very long journey and we needed a lot of patience, especially because of the fast growth of the Congregation to more than 15 countries from its foundation in Japan. This long and slow process started in 2004. The Portuguese, Korean and Japanese versions of the renewed Constitutions were studied, translated back and forth a few times in order to get the common understanding in all languages and cultures where our sisters are living. At the same time the Regulations became shorter to give more space to the provincial directory that give more localized guidelines in each different situation.

Have you a greeting for the Sisters in the three Korean provinces?

Congratulations on the 80th anniversary of our foundation and 60th anniversary of our start in Korea! It seems that now after 80 years there are more people who hunger for love than in 1937, there are more people who are waiting for the Mercy of God in our times! I think, that our Congregation is more needed than in the past! In the present situation, we don’t’ need great showy works or institutions. We need each of our Sisters to l practice the Love of God. Let’s become in this way religious of the Congregation of the Caritas Sisters of Jesus! We ponder the words of Blessed Philip Rinaldi in 1925 when we sent the first nine Salesian missionaries to Japan: ‘Only with Love - Caritas will you touch and attract the hearts of the people!’ This is the origin of our Charism, lived among the first Sisters with Fr. Cimatti and Fr. Cavoli. I pray for evangelization in this country. Don’t forget our first love and first heart! We are united in prayer!