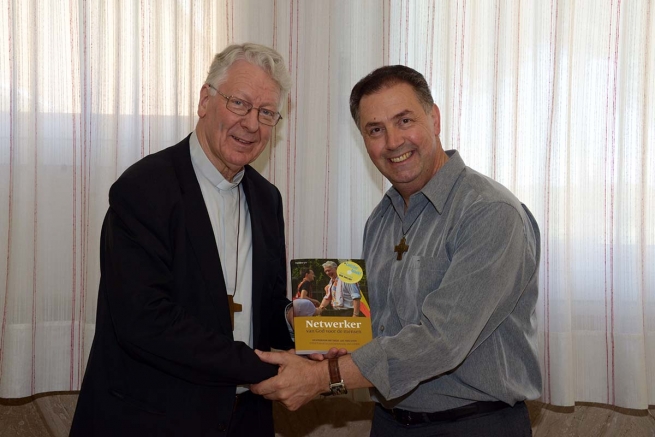 (ANS - Rome) - He has been President of Caritas Europa for nearly 3 years, bishop  of Gent (Belgium) for more than 13 years, and a priest for over 46; and yet, had it not been for an unexpected visit from a distant  missionary granduncle  based in China, who knows what the life path of Mgr. Luc Van Looy, SDB, might have been. Years later, the Salesian  Bishop,  former vicar of the Rector Major between 1996 and 2003, looks back on his life to see "the silent guidance of God", and he has collected the results of this research in a book-interview he presented to the Rector Major.

What is the book's central theme?

It is my Salesian experience, from my youth to this day. The question we asked at the beginning of the book (Netwerker van God voor de mensen) was: "How does God intervene in a man's story or history?" Looking back you can see certain life events that, individually, are not easy to understand. And yet, they are the moments in life in which, with faith, one can see the gentle guidance of God.

So why did you become Salesian?

It is the focal point. I went to a Jesuit school and was sent back for a subject of study I'd failed at. The Jesuits suggested that my father have me do an internship and they advised two options: the Redemptorists or the Salesians. When discussing this at lunch that day, my granduncle, a missionary priest in China who never visted more than once a year, arrived and  said to my parents: "If you want to educate your son well, send him to the Salesians ".

Do you remember other "coincidences"?

Yes. This missionary granduncle of mine died in China two weeks before I left for a missionary in Korea, leaving me his chalice.

Again: once in Korea I discovered my missionary charism. But if I had not gone to Korea I would never have become Provincial, because Belgium was too big a province. Instead, as Provincial of Korea, I was called to the General Chapter, and  elected General Counselor. And if I had not been in Rome at that time, they would never have chosen me as a bishop, because in the Vatican they knew me as Vicar of the Rector Major ...

To sum up, in the book we selected several episodes of my life that narrate "the silent.