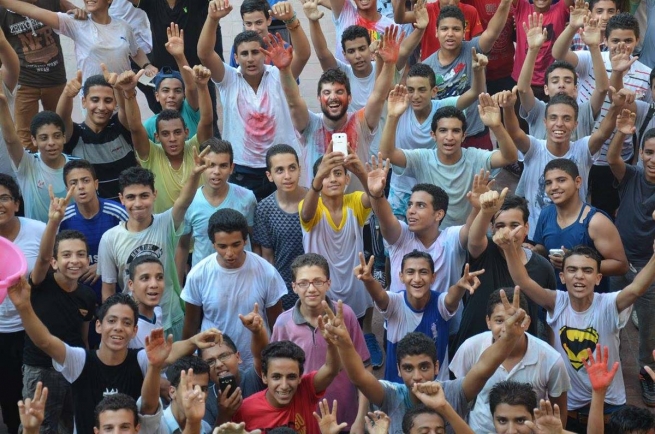 (ANS - Rome) - Twenty-six young Italians have decided to dedicate part of their summer in a holiday of solidarity in Egypt serving as missionary volunteers in Salesian houses in Alexandria, Cairo-Zaytoun and Cairo-Rod El Farag, where they shall engage in educational activities in oratories and schools. Fr Michelangelo Dessì of the Missionary Animation of the Salesian Central Italy District(ICC) presents this educational, supportive and missionary proposal.

Who are these young people?

They are normal people: young university students, or students in their last year of secondary school, or in their first work experiences. Most are actively engaged in their Salesian community as educators. They have been preparing all year through the route of the “SCUOLA DI MONDIALITA’” (“Globality School”), and then with the orienteering course, which aims to prepare the volunteers to live the missionary experience more directly. For them, it will be an experience of broadening their hearts and expanding their minds, being in touch with the poverty of the world, in a climate of Salesian spirituality in a style that is educational.

It is not an absolute novelty ...

It is the third year that we go to Egypt. If the purpose of the first "expedition" was getting to know and study the missionary collaboration project, last year 13 young people lived in Cairo for an entire month, busy challenging themselves: it is hard to face the dirt in every corner, with the lives of half a million people at the Moqattam garbage dump, with the clear smile of the young south-Sudanese refugees forced to flee their homeland for being Christians ...

What is the sense of Salesian presence in Egypt?

The future of Egypt and education! I believe that in this we Salesians can give our specific contribution, without distinction of origin or religious belief, but certainly with a focus on the most needy.

Is it a full-time missionary activity?

I would say yes! The Rector Major has delivered us the Middle East as a missionary frontier! It is a missionary activity because we have not chosen it, but we have been "sent"; because it puts us in touch with the world's poverty; because it continues to testify the Christian faith with simplicity in a predominantly Islamic context; because it allows young people to taste the beauty of donating a lengthy period of their time for the benefit of others; it is missionary, finally, because it raises more courageous choices, of the total donation of one's life to the service of others and and God.