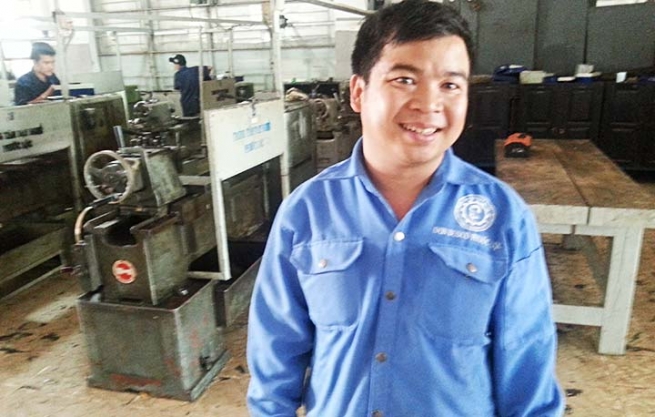 (ANS – Tan Phuoc) – Mr. Phan Dinh Thuc is a Teacher of Mechanics in the Phuoc Loc Vocational Training Center, in Tan Phuoc Commune. Thanks to the Salesians, he got to know the spirit of the family, grew professionally and now has a job as a teacher. Here is the account of this past pupil.

How did you enroll in the VTC of Phuoc Loc?

I came from a Roman Catholic family of 7 people. My family lives at Duc Le parish in Dakmil, Daknong province. As members of Duc Le parish, my parent and siblings actively join all the activities organized by the parish priest. In 2006, after graduation from secondary school, Fr Isidoro Le Huong, SDB, our parish priest, suggested I visit the Phuoc Loc Vocational Training Center. I went to Phuoc Loc and found the place so interesting I decided to enroll in this technical school in April 2006, and graduated in July 2008.

What are you most grateful for in the education received from Don Bosco?

I was far from home, and I was accepted as a boarding student in Phuoc Loc. We were the first group of boarders in VTC. At that time the Rector and principal was Fr Joseph Nguyen Van Quang, present SDB Provincial of Vietnam - Mongolia. There were two Salesians in charge of the boarding house, Br Gioakim Nguyen Huu Thuoc and Br Peter Nguyen Tan Toi, as well a large Salesian community. During my life at the boarding house I learned how to behave well and, above all, the necessary virtues in becoming deeply humane person. Besides studying technical courses in the school, the Salesians also taught us how to live together, play games, do chores and to look for a job after graduation. Living in this place, I felt like it was my home and my second family. I discovered that in the Salesian house I found a spirit of family, so I talked to my own family and they decided to send my two younger brothers to Phuoc Loc to study as well. Both of them have graduated and are now working in proper jobs.

How did you become a teacher in the Vocational Training Center?

While I was taking an intermediate-level mechanics course, I was advised by Br Gioakim: “If you want to improve your life, you must rise to higher studies!” He was speaking about university.

After graduation in Phuoc Loc, I worked in a small company introduced by Br Peter Toi. While I was working in this company, I often received phone calls from Br Gioakim who encouraged and pushed me towards higher studies. From that time on, I sought a fitting college. And at the end, Ho Chi Minh City University of Technical Education was my target. I spent time studying and passed the entrance exams in November 2009. After 4 years of studies, I graduated as a Mechanical Engineer in August 2014. Then I was kindly invited by Fr Joseph Quang to be a teacher in the Mechanical Department of the VTC. I was touched by Br Gioakim Thuoc saying: “What you are now is because of the Salesians!” So I decided to work as a teacher and became one of the Technical School staff.

What is your contribution to the Salesian educational work in PL? (Hostel, education, teaching)

I am currently a teacher in the mechanical department and assistant in the mechanics workshop. After teaching in Phuoc Loc VTC for 3 months, I realized a strong need for a place to stay, since only a few find a place to stay at the VTC boarding house. It was really an urgent need. Because our Training Center Boarding house can accept only a limited number of 150 students, from that moment on I got the idea to open another external hostel for our Training Center students.

Thanks to the support from Fr Peter Dinh Cong Truong and Br Gioakim Thuoc, starting September 2015 we rented a house and received the first 15 students as part of a first group. It was a good result. From September 2016, the number of hostel students increased to 58. For this coming year, 2017-2018, we plan to have 65 hostel students, including five of them on 50% scholarships (lodging and food).

Every year, on Tet holiday, you are meeting other SDB Past Pupils. Who comes back to their mother school? What dream do you have about the possible Don Bosco Alumni Association?

Every year our Past Pupils gathered together during the Lunar New Year, but I did not see the importance of this gathering.

About the Don Bosco Past Pupils I have a dream: "As Past Pupils of our Training Center could we have a small organization or an office in Phuoc Loc? We could support the Salesians in the school organization and start our Association with their help. In my mind, the possible contribution of the Past Pupils could be:

I wish the Salesians would be more enthusiastic in caring about our Past Pupils, to visit their families. I dream to have more hostels for VTC students to improve the environment for our students.