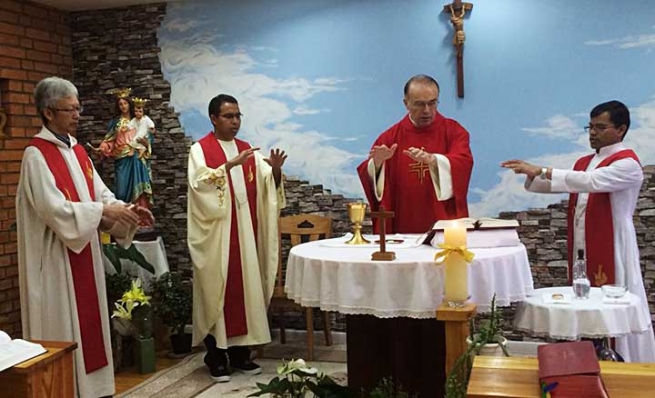 What role do Salesians have in the Church and Mongol society?

The Catholic Church in Mongolia has just 1 local priest and about 1,000 Mongolian faithful, along with 80 missionaries. The Salesian Family plays a fairly important role.

There are 11 Salesians from 9 nations, 6 Daughters of Mary Help of Christians (FMA) and 18 Salesian Cooperators, all locals, along with some lay missionaries.

In this young Church, the elderly, children and teens represent the majority, while there are only few complete families. The Youth Ministry of the Apostolic Prefecture is animated by FMA and the Salesians, and the Salesian Cooperators of Darkhan also give their contribution.

The simple "Don Bosco Media" in Darkhan is the only Catholic publisher and publishes various aids for catechesis and youth education and a small youth magazine called "Don Bosco" that is issued and distributed in public schools.

In total, the Salesians animate 2 parishes, one technical school, 2 youth centers and one family home, while the FMA is a kindergarten, elementary school and a youth center.

What are the priorities for the future of the Salesian presence?

Above all, the formation of the same Salesian missionaries: we need to invest in the study of the language and make sure that at least one confrere is available each year for some form of teaching.

Also needed: at least another 2-3 missionaries in the next 6 years; a closer link with other Provinces; even missionary volunteers; an investment in the formation of lay collaborators ... We need to keep pace with the situation of rapid social-cultural-economic development bearing in mind that Mongolia is a place of first evangelization.

The Mission in Mongolia offers many challenges to missionaries: an extreme climate, from -40 ° C to 40 ° C between winter and summer; a difficult language, difficulties with visas, difficult legal and economic situations. It takes a lot of faith!