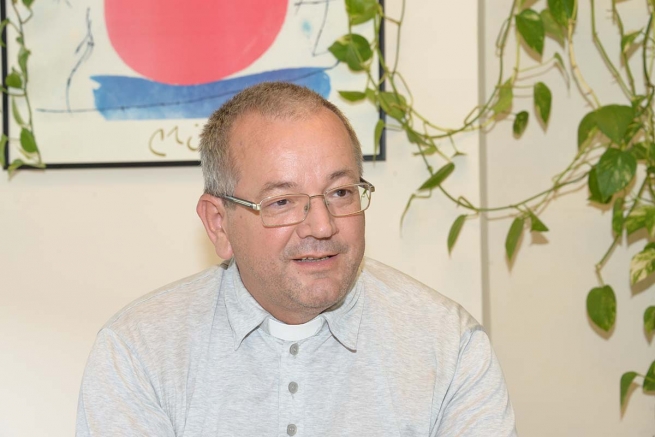 (ANS - Rome) - Fr Ferdinand Kubíc belongs to that group of Salesians from Eastern Europe who, due to the dangers and restrictions of communist regimes, had to carry out their religious formation clandestinely. His father never knew that he had a priest as a son and his mother only knew for sure towards the funeral of her husband, Fr Ferdinand's father. This is his story.

Fr Ferdinand, how did your clandestine Salesian formation play out?

For 8 years, that is during the novitiate year, then 5 post-novitiate years, and the last 2 of preparation for perpetual vows and priesthood, we would meet with our educators during the weekends for three times a month at the beginning, then twice. Obviously those meetings alone were not enough: I also had to study, always in hiding, when I was at home. At the same time, I was teaching at a high school where I also had to be careful not to stand out from the regime's orthodoxy.

In this way I studied the fundamentals of all my subjects, and did the examinations during the meetings we managed to have. With such training, at the end of the regime I found myself with no certificate attesting to what I had done, but throughout all those years I continued to live close to ordinary people.

Was there no way to do this differently?

There were seminars held in the open, but the number of admitted candidates was limited and were, however, controlled with some candidates infiltrated. When I completed my training course, I received the diaconal and priestly ordination at the same time, within a few minutes each other, without even a Mass.

In the room there was only Bishop Ján Chryzostom Korec, future cardinal, and another priest being ordained like me, and me.

Did you ever have problems when you were teaching?

Once I was asked, "Are you a believer?" I knew that if I answered yes, that would have been my last day of teaching; but nor could I say no. So I answered with a question: "What does it mean to be a believer?" It was enough.

What do you do today?

I teach. Today, freely, at the Don Bosco Institute for Social Work in Žilina, Slovakia, an affiliate of the "Saint Elisabeth" University.