Italy - Don Bosco's relic, Fr Attard: "It is not spiritualism, but a projection towards the sacred" 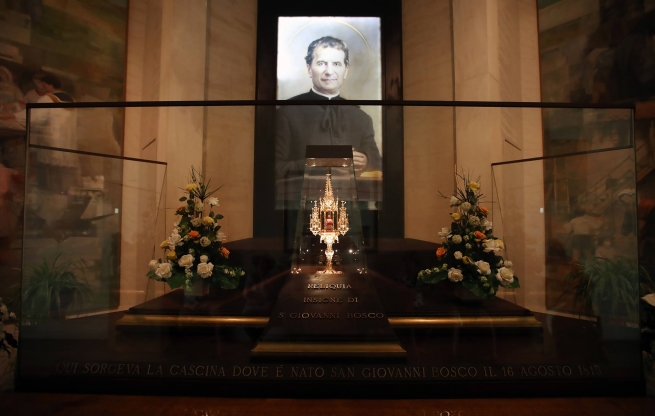 (ANS - Castelnuovo Don Bosco) - The relic of Don Bosco, stolen last 2 June and recovered after a few days by the Carabinieri, was returned to the Basilico of Colle  Don Bosco on 16 August. Here is how Fr. Fabio Attard, General Councilor for Youth Ministry, expresses his thanks to the Carabinieri and the sense of the Sanit's "presence."

"First of all," Fr. Attard begins, "I want to express my deepest gratitude to the Carabinieri for their work. Yesterday,  General Amato described the great effort made to find the relic after it was stolen last June 2, the first Friday of the month, a sad event that had great media resonance all over the world."

"After the find," continues the Salesian, "and at the conclusion of the necessary legal procedures, we thought of how to relocate it to its place. These days at Colle Don Bosco, 250 young people from 25 countries met, most being from Europe but also from the Middle East, for the SYM Confronto 2017 Meeting." The meeting, which takes place every four years, always ends on August 16, "Father Don Bosco's birthday, this year his 202nd": a 'providential' coincidence and a 'great opportunity' to "place the relic within the context of a pastoral journey welcomed by the same young people so beloved by Don Bosco," emphasizes the religious.

"His presence among us," he continues, "is a 'donated presence', as the Rector Major pointed out, and the crowning achievement of the journey taken with our young people."

But today what is the value of a relic, a piece of a saint's body? "Society can remove the image of God from the public forum," he replies, "but cannot eliminate the thirst for God from a person's heart, and this transcendence is what young people are looking for. The relic of a saint is then that concrete thing that projects us and opens us to the sacred of which it is a visible part."

"If they are offered a sense of belonging to a group, to proposals lofty and witnessed, to vision and project for the future, accompanied by adults who are authentic and significant, young people begin to see what they are looking for," the Salesian concludes. "The relic is not spiritualism, but a projection of itself towards the sacred that everyone is carrying inside one's self."