Spain - "No worries for oneself... This is not the image, neither the language nor the reality of the Salesians": Fr Á.F. Artime 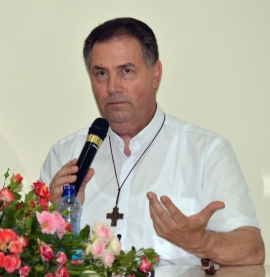 (ANS - Madrid) - "No careerism, no comfort zone, no worries for oneself... This is not the image, neither the reality, nor the language of the Salesians of Don Bosco...," so says Fr Ángel Fernández Artime, Rector Major, speaking clearly as the person responsible for the second largest male religious congregation in the world, with 15,000 consecrated persons, a thousand less than the Jesuits.

You've just returned from a trip to Angola and Mozambique. Before that, you were in India, and before that Brazil. How do you live with your suitcases always packed and ready?

Physically, it is very demanding, the rhythms are inhumane ... Visiting communities, groups, days of 15-16 hours. Listening a lot ... Good health is necessary ... and above all, the strength that comes from faith, vocation and the many people who have you in their heart and thoughts.

What is the Rector Major's vision on the Congregation?

Our congregation is present in 132 countries ... We have been living a few years of profound serenity, not the peace of the cemetery, no. I see a lot of vitality, a lot of strength, a force that is not in power, in success, but in service... We are planning to open three more centers: in Gambia, Malaysia and a new one in a refugee camp in Uganda. The Congregation has embarked on a very beautiful journey, with serenity, with great strength in work that is shared between religious and laity.

As a Congregation what guidelines are you following?

We have a few very clear guidelines in the General Chapter. First of all, to live as consecrated persons. We are not social service providers. We are not well-organized NGOs with 15,000 members. We are a congregation with men of faith, consecrated, and this is the testimony we want to offer. Wherever they try to silence God, we want to make God visible through our lives, through what we are and what we do. Secondly, there must be a permanent ongoing response to the priorities of the boys, girls and young people and, among these, the most needy.

And you are the second congregation by dimension, behind only the Jesuits?

It is not a question of numbers, but we are a large congregation. We, like the Sons of Don Bosco, were born in the suburbs, the outskirts. Some might say: the Salesians are with the rich, and I tell them, it's not true! The preferential option, in 85% of our centers, is for the poor and humble people.

And the work in schools?

I recently returned from Mumbai and I met 1,500 boys and girls taken from the street, in dozens of Salesian centers. Then I was at the anniversary of an elite school and I spoke with the educators ... I told them: "It will depend on the fruits of our education if this school makes sense or not ... It is not a Salesian school if it does not educate to the Christian identity. If we do not educate so that our students have a clear social conscience, a sense of justice and equality ... If so, the school does great social, educational and religious work; if not, we can close it down."