Madagascar - Fr De Santis, 33 years on his mission: "Now this people and this culture are becoming my cultural and spiritual heritage" 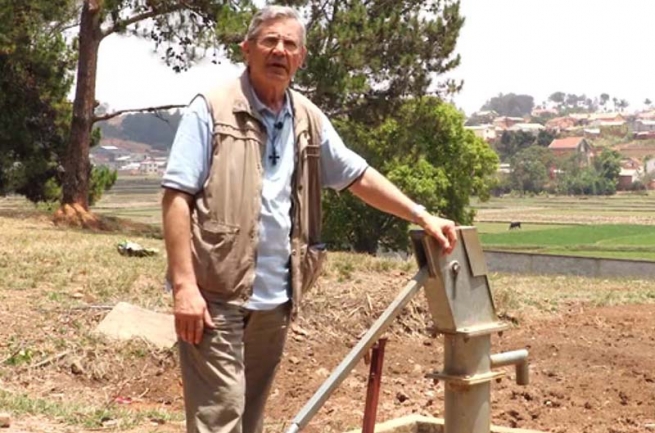 (ANS - Ivato) - "In all the work I've done, I've tried to spend myself for the good of these poor children and the people of the place where I was. (...) I am still amazed today, talking with the children, in discovering their ways of seeing things, of reasoning, of understanding family relationships. But I am ever more convinced that the Gospel of Jesus and the Charism of Don Bosco are for them, too." Over thirty years of mission have not affected or dampened the missionary enthusiasm of Fr Erminio De Santis, an Italian Salesian, a disciple of Don Bosco among the children and young people of Madagascar.

Fr De Santis was born in 1950. In 1983, he left Italy to go to the Salesian house in Clairvaux. "I immediately started to help poor, orphaned and abandoned children," he says. "In these 33 years that I've been on a mission, I have not lost the joy of working as a missionary nor the hope of seeing the Congregation flourish, despite the difficulties of every kind that I have encountered on the journey."

It was not easy to work in a country like Madagascar, but Fr De Santis was able to count on the help of the local population, who always considered the Salesians "friends, benefactors of their children, priests dedicated to ecclesial service, promoters of development and accompaniment of the people of the missions entrusted to us. Now this people and this culture are becoming my cultural and spiritual heritage."

"I have traveled far and wide in Madagascar!," he likes to point out. "I was a Provincial Economer, then Director-Economer of the Vocational Training Center of Mahajanga, then Provincial at Ivato, then at Betafo, where I took care of the faithful of the churches of the countryside and mountains of our large missionary district ... And then the work with the aspirants and with the 1,000 junior high and secondary school students." Until he returned to the starting point in Clairvaux, that is "at home."

With his story, Fr de Santis bears witness to the difficulties and satisfactions of the missionary life: "Initially, it was not easy due to the shock provoked by the cultural and social leap on arriving in a completely different world that was completely unknown to me, unimaginable! (...) But the Salesian Congregation has a beautiful future here, where teens and young people come to meet us with determination and sincere hope."

Further information is available on the "Missioni Don Bosco" website.