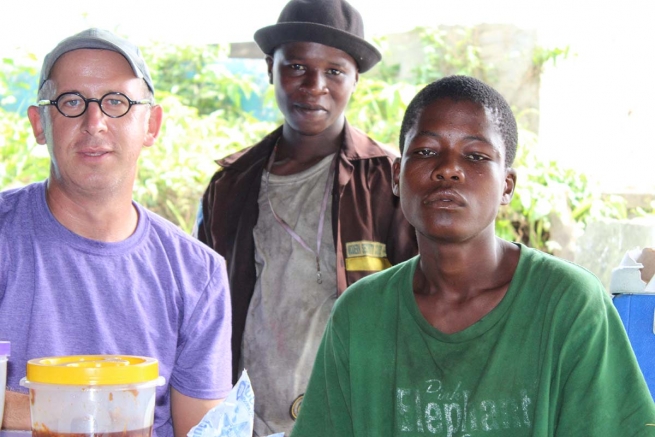 (ANS – Monrovia) – Brother Lothar Wagner SDB has been in Liberia for about a year now. In the West African country the 43 year-old Salesian takes care of children and young people who are socially marginalized, such as the homeless “cemetery children” from Monrovia. The young people have to sleep in tombs because they do not have an alternative sleeping place.

How are young people doing in Monrovia?

The young people suffer the most from the consequences of a decades-long rebel war and the Ebola crisis. The educational system is rated one of the worst in the world. The police and judiciary are corrupt. The health care system has broken down. According to a new study more than half of the population is directly affected by famine. I could continue with that list. Ultimately it is fatal that the state crisis has reached the families and thus also the children. Despite hard work, the daily salary does not suffice to feed the family. Frustration and the resulting aggressions of the leaders in the family are transferred to the children. Families are torn apart, whole rows of children end up on the streets. In the last couple of months I have met numerous children who consume drugs to escape their everyday life. That is simply terrifying.

What do youths need the most?

The young people need encounters with people who take their problems seriously, who help them face conflicts in a constructive way. Youths need role models – people who show them a hopeful perspective in life. And they need a lot of attention. Attention they do not receive in most cases and then they can easily end up in a vicious circle of drug addiction, prostitution, acquisitive crimes and finally sickness and despair.

The children and also the Salesians at the grassroots level need a lobby. They are in need of people who support them. Everybody should act firmly so that children in seemingly hopeless life situations get professional and motivated people to support them. Often the children need a doctor, a teacher, an educator, even more a friend as their companion. But these people also need to be trained. Besides personnel also rooms are required, in which the children can develop themselves. A school is needed, a training place and a playground as well. We should also not forget that many children who are in danger are  in need of temporary shelters.

How can the Salesians help them?

Firstly, we have to be present. Or in the words of Francis, the Pope: we have to be  present in the peripheries. A sustainable partnership between the children and the Salesians is very important. A non-binding declaration of intent, as we often see it in politics, is not sufficient in this case. Instead the declaration must be written in a concrete and unmistakable manner to make sure that we go through thick and thin with them, day and night: we take them from the street and bring them back to their families, take them from prison back to school, from drug addiction to a meaningful life. They need intact families, good education and a viable professional training.

How is the current political situation in Liberia?

At present, this is difficult to assess. It seems that a few influential people consciously make the situation complex. Currently it is hard to see through the situation. The international media with their short tickers rarely report about the situation in Liberia because the political situation is simply too diffuse. Fact however is: the people want a political change. (…) The presidential elections were interrupted after the first round in early October due to the accusation of massive electoral fraud. (…) The Supreme Court and the National Election Commission will decide if a run-off election between the two candidates will be held but they take an extraordinary long time to make a decision. It is unclear what the role of both institutions actually is. We sincerely hope that the Liberian people show perseverance and patience.

Which moments or encounters give you strength?

It was pouring rain when I came to the central cemetery in Monrovia for the first time. There I found children who lived in tombs because they did not have a roof over their heads. Suddenly, I had longer eye contact with one of the children who was looking over at me from a tomb. After a while the boy smiled at me. Without any words. A small gesture as a clear sign, ann invitation to his world. It was simply overwhelming. He allowed me to come closer, to enter into his world. This really reinforced my decision to be there for the forgotten children. What a message was given to me through the child, when I saw in him Christ himself. I met him through the child, in the tomb. An incredible feeling of happiness. A gift of grace in the middle of unthinkable suffering.

For Christmas, Turin's "Missioni Don Bosco" launched a campaign of distance adoptions for the support of 20 children in difficulty, so they can, for three years, meet their basic needs and attend Salesian schools, thus giving them a chance to hope for a better future.