Syria - Salesian Oasis of Peace in the war raging in Damascus 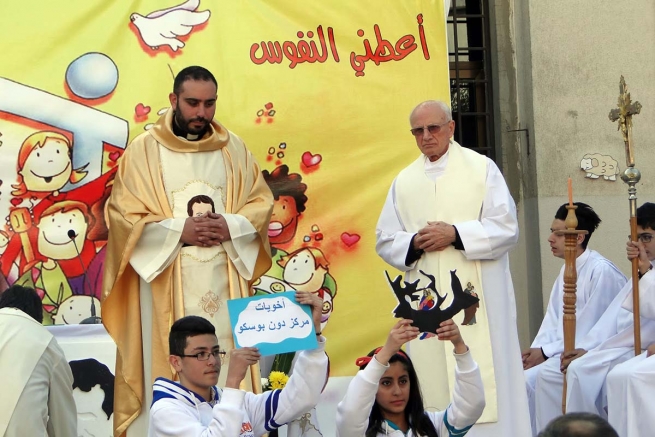 (ANS - Damascus) - Fr Munir Hanachi, a 34-year-old Salesian from Aleppo, has been in Damascus since 2013, and he is the Director of the local Salesian house. In the current context, where rockets still rain down on Damascus and the militias surround the city, the Salesian center has become an "Oasis of peace" as it offers, to those who frequent, a place of serenity and essential services that in the homes of people are now rare.

Is the situation in Damascus currently pacified?

Absolutely not. The terrorists are still nearby. Mortar shells and missiles arrive in the city, and even if it is no longer spoken of in the West, this does not mean that the war is over in Syria and Damascus. The Syrian national army is making efforts throughout Syria and we hope it will end soon. In Damascus there is still fighting in the outskirts. The situation is absolutely not calm. Recently I had to close the oratory several times for these missiles fired on the city.

Was your neighborhood and parish hit during the war years?

Thank to God the bombs directed to us did not arrive, even if they burst in the vicinity, and shards and bullets entered our structure.

Tell us about the youth center.

It is one of the busiest in Damascus with over 1,300 boys from the second grade in elementary school up to university students who come here from every part of the capital to live a few hours of normalcy. Thanks to two generators we are able to always have electricity and there is always water, things that are missing in homes. We try to build a welcoming environment, that's why we called it "Oasis of Peace". Every day we offer everyone a meal because even food in the families is scarce.

Many Syrians have fled. The young people who come to you, what do they expect from the future?

Our job is to help and do what we can to defend the Christian presence in Syria. Many have left the country for various reasons. We try to be present and help families in all possible ways. We cannot forget that war is a very heavy burden. So many have died, so many have been kidnapped. You cannot tell a young man not to leave after seven years of war (...). We pray that all this will end even if it will take years to rebuild the country.