Moldova - Fr Baracco: "being missionary" among the youngsters of Chisinău 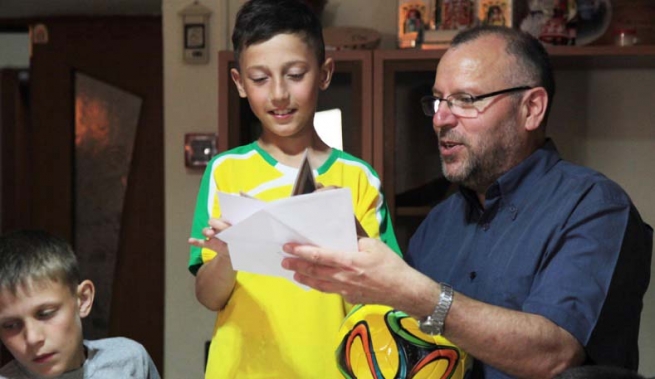 (ANS - Chisinău) - "It's a very beautiful center because in my opinion it gathers all four elements of Don Bosco's house: a house that welcomes and hosts the needy, through the foster home; the playground, where one meets others and is educated; the school, with vocational training courses; and a church, thanks to our small parish, which counts only about forty Catholics," says Salesian missionary Fr Tiziano Baracco about the Salesian house of Chisinău, in Moldavia.

Of himself and of his mission, Fr Baracco says: "I live with young people on a daily basis and support the poorest and most abandoned children, just as Don Bosco did. I take them away from the city streets and its many dangers. The language of love and tenderness makes even deep wounds heal, restores hope, makes their smiles bloom again."

Originally from the North-East of Italy, Fr Baracco has been a Salesian for 40 years and a priest for over 32. He left for Romania in 2000 and after 14 years between Bacau and Constance, he was sent to Chisinău.

"The best thing about this land are the children who come to the oratories, the formation groups, the vocational training courses, the foster homes. Through the years, it has been nice to grow together, overcome by the friendship of so many young people who all need Don Bosco, his proposal, his joy," he adds enthusiastically.

There were difficulties, of course: "It was not easy, sometimes I got discouraged," he continues. "But I learned to see that same crucifix Don Bosco himself showed his mother one evening that she was angry! And then there's the desire to start again, a challenge! That's why I continue to live with them, the children, and for them, feeling that this land is more my own every day."

Today Fr Baracco is convinced and determined in his work as a missionary and Son of Don Bosco: "Here I feel I'm a missionary as much, I imagine, as a priest in an Italian suburb, or a teacher in his or her classroom or a mother in her family. ... I never thought of leaving as a missionary. I have always believed that being a missionary was simply to radiate, wherever he is, what he feels and knows that is important to himself, because in his own time he was fascinated and filled with meaning! I speak, of course, of Christ! And like him, to love and serve completely."