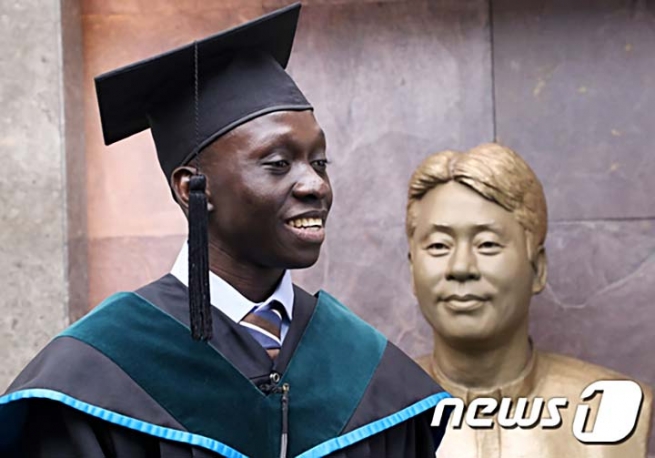 (ANS – Busan) – Thomas Taban Akot, a Don Bosco Past Pupil of Don Bosco School Tonj, South Sudan, is an international student at Inje University-Medical College in Busan, Korea. He graduated from the medical college and passed his Medical Licensing Examination in Korea. Fundamental in his fundamental professional and human journey was the meeting with Fr. John Lee Tae-Suk (1962-2010), a doctor and a Salesian.

Your hometown in Tonj, South Sudan became known for the great difficulties of the long civil war and the many causalities - how do you feel about this?

The civil war continued for decades. Many people lost their homes or became refugees. Many got sick without any possibility of medical treatment. I was asking myself: “What can I do for those who suffer so much?” When I was a student, I was interested in science, but my conclusion was that I become a medical doctor! (laughs)

Until now, there is a lack of necessary infrastructure in your hometown.

Yes, until now, there is no real hospital. Only the capital of Juba has the latest medical instruments and devices. Last year in February my father passed away (stomach cancer), but I was not able to return and to help him as medical doctor. I had quite strong remorse of conscience, and I was just crying. However, the ongoing thought about my mother and extended family helped me to stand up and not disappoint the many who believed so much in me.

How did you become a medical student in Korea?

Yes, I was lucky. The late Fr. John Lee, SDB, recommended me. During Christmas 2009, I got a phone call from one doctor who asked me if I would like to study medicine in Korea. First I thought the study would be in English, but then I spent a long time to master also the Korean language.

Do you remember your first encounter with the late Fr. John Lee?

Yes, it was during my junior high school studies. I was an altar boy in Tonj and Fr. Lee invited me to join the youth music band. So I learned the flute and guitar. Our band grew to up to 30 members and I was entrusted with the alto saxophone. I had also seen that Fr. John after the Mass went every day to the small clinic and helped so many patients. All of them looked very happy. I told to myself: “I should also become like him!”

Who was Fr. John for you, Thomas?

I spent about eight years with him. It’s difficult to describe it in one word. What is sure, Fr. John brought joy to everyone in Tonj. He was talking to all, young and old, without exception. At first it was difficult for me to approach him since he was a priest, but later on I overcame the distance. When I reflect on him as a medical doctor, it’s amazing. Especially in Korea to become a medical doctor means to receive a lot of fame and wealth. But Fr. John gave up all of this in order to come to the poor country of Sudan and serve us. It was his life choice.

To study medical university in Korea was not easy. How do feel now after graduation?

I still don’t believe it. It was really difficult from the time of enrollment until now. However I was not ashamed to ask the help of my classmates. In this way I became very close to my classmates and was never tired to ask their help. I was studying very hard, but without the daily help of my fellow students it would have been impossible to graduate and pass the government exam.

Who helped you most in a concrete way?

Yes, there were three main benefactors. One was my roommates in the University boarding room and we became very close friends. Then, the friends of my class with whom we spent a lot of time in our study group before exams. Since I was foreigner they helped me first of all to establish trust with each other, with the patients. They told me often ‘Older brother, you should not do like that, you need to do it in this way!’ Their help was crucial and substantial. I received their small notes with memos containing many details! After exams I ran to them to express my grateful heart.

What is your dream about your next life in your homeland of South Sudan?

My first goal is to conclude the internship and resident period and to become a surgeon. I would like to become like Fr. John Lee, to serve other people in Tonj. In fact, I dreamed of returning immediately after my graduation, but the academic authorities of Inje University convinced me to finalize the whole medical preparation in Korea, since in South Sudan there are not yet the best conditions to do this.

You told us that Fr. John Lee was your life-model?

In my life I never reflected who is my role model. However, when I met Fr. John and lived together I learned from him many things. He was not just a teacher in the classroom who transmitted knowledge. He never taught us how we should live, what we should do. But observing his life attitude, I realized he approached everybody as a friend, with a humble heart in order to make other people happy. This is a precious life attitude I learned from Fr. John Lee. When he passed away, the people of Tonj were crying like his family or relatives. Thanks to this attitude - to always take the first step towards others - I have received in Korea a lot of help from other people.