Kenya - Fr Felice Molino: "My heart told me that I had to leave as a missionary" 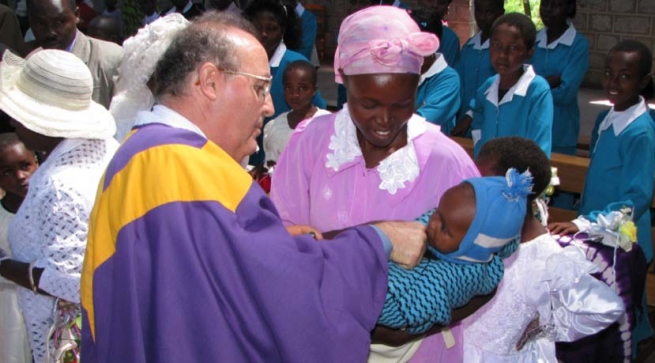 (ANS - Nairobi) - We define him a Salesian "of doing", Fr Felice Molino, 70, of whom more than 50 as a Son of Don Bosco and about 37 as a missionary in Africa. "My life is dedicated to others," he says. "Over the years I have carried out many activities for children, for street children and for the support of mothers in difficulty. They are the center of my activity, and for them over the years I have refined an intervention strategy aimed at recovery and integration into society." This is his story.

I am Fr Felice Molino and I have been in Africa for many years now. I was immediately assigned by my superiors to the missions in Kenya: in 1981 the first destination was Siakago, where I helped to make some improvements to the mission. In November 1982, I was transferred to Embu, where a large vocational training center now stands. In 1987, it was the turn of Makuyu, and I remained for 21 years as a parish priest. A large center was born there, with a parish, a house for Salesians and the nuns, a dispensary, an orphanage, a vocational training school with many activities and even a typography.

In 2008 I was called to head the Utume center, Nairobi, where young people from different nations and cultures are formed to become Salesians. And finally, in 2011, I was entrusted with the role of director at the "Don Bosco Missions" in Nairobi: a delicate task, because I have to find the help and resources necessary to help the Salesian houses of Kenya and Tanzania.

Africa has always had a special charm for me ... already at 17, I started selling small things to help the missionaries. Thanks to the "Africa Project" started in Makallè, Ethiopia, I started organizing marches to Turin, crowded and joyful ... that reclaimed the duty to help those in need anywhere in the world.

My heart, however, told me that I had to leave as a missionary.

The young and the poor have been and are my great passion and the true motivation of my being a missionary. My first experience in the oratory of Turin taught me to love young people deeply and to want to work for them, for their wellbeing, and to give them a future...