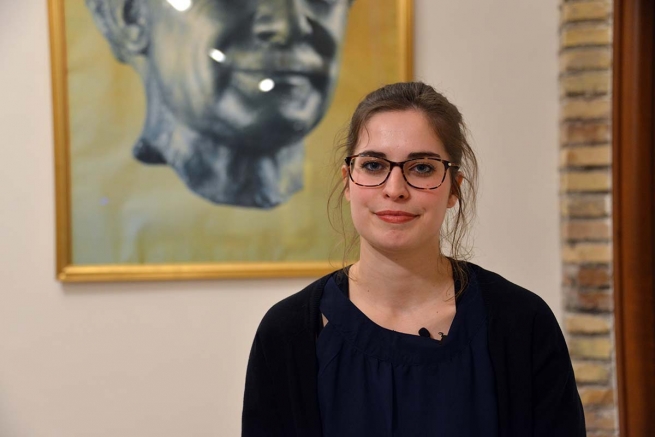 (ANS – Rome) – Marketa is a youngster from Prague, Czech Republic. She is a student at the “Charles University” of Prague, studying in the faculty of Education, and most of all she is attending the Pre-Synodal meeting, since she was chosen as a delegate from the Czech Bishops’ Conference. However, she is also a volunteer in a Salesian organization, “SADBA”, with the Salesians of Don Bosco. Here she offers us a point of view from within the Pre-Synodal Meeting.

What is the relationship between young people and the Church in your home country, Czech Republic?

So, it's important to say at the beginning that Czech Republic is perceived as one of the most atheistic countries in Europe. Because there is only a 10% people who are religious, and they’re Catholics. So only 10% of people are baptized and are practicing their faith. But even though this fact is there, I don’t feel alone in my faith, because the Church is doing a lot of projects, a lot of pastoral care. We do have a lot of events of youth. So, it is very nice to be a Catholic, even though I’m a Catholic in this atheistic country.

What is your experience with the Salesians of Don Bosco in Czech Republic?

I am a volunteer with the Salesians of Don Bosco in Prague. I’m responsible for short-term voluntary service, and we are collaborating with Don Bosco Youth-Net, which is a platform of Salesian organizations sending volunteers from one organization to another. So I’m responsible for recruiting Czech volunteers and for sending them and guiding them on this voluntary service they are doing abroad.

When the Church is preparing a Synod on “Youth, Faith and Vocational Discernment”, what is your personal experience bringing in this Pre-Synodal Meeting?

As I have said, I have experience with the pastoral work, the work the Salesians do. So this is one experience I can bring to the Synod: how Salesians work with youth, and what are the most important elements of Salesian youth work. And besides that, I’m actively involved also in the Czech Bishops Conference, and in their pastoral care of youth, at the Secretariat of Youth Ministry. In the last couple of years we were organizing, for instance, the World Youth Day in Krakow. I was there as part of the organizing team for the Czech National Center. So I have experience with the preparation of those big projects. And also, last summer, summer 2017, we had a big meeting of Catholic youth, in Czech Republic. It was like a national youth meeting and it gathered over 7000 youth from the Czech Republic. So that was a very great experience, because it was a big meeting, it lasted for one week and I was part of the organizing team. So that was an important experience for me to see the whole process of preparing such a big event, because we had been preparing it for more than one year. So I have experience in this field, and I think that this is something I can bring to the Synod and I can share this with other people.

What did you enjoy the most in these first days of Pre-Synodal Meeting?

Well, obviously what I enjoyed the most was when Pope Francis came on Monday morning and he visited us at the Pre-Synodal Meeting (March 19, 2018). So that was for me the biggest experience and I really liked it because, since we are here only 300 people, it’s not a big amount of people. The whole meeting is like a family meeting. And also when Pope Francis arrived among us, it was like a family gathering, it was very intimate. A very beautiful atmosphere and I really liked it. I also liked the fact that he really motivated us to speak about our desires, and about what we would like to change in the Church, and he motivated us not to be afraid to speak up and open our hearts and talk about everything we have in our mind. That was for me the strongest experience so far here.

Which change do you expect from the Church, in its relationship with the young people, after this Synod?

I have to say that I think that this Pre-Synodal meeting is already the change. Because I think that the step the Church made through this Pre-Synodal Meeting is already a big step towards youth. So I think this is already the change. We are part of the process, because the Synod, as we know, has many different steps, it is a process with many faces and many stages. I’m glad to be part of this process. And I think that it’s a great change that it is the Church making steps towards youth and saying like: “Ok, tell us what you would like to change. We are interested in your opinion”. So I think that that’s very nice. And also what I would like to emphasize is the fact that Pope Francis says that he doesn’t want to have a Synod about youth, but with youth, with young people. So it’s not just a Synod about young people, but it’s Synod with young people. And I think that it is already a big move forward.

What message would you like to send to all the young people of the Salesian Youth Movement all around the world?