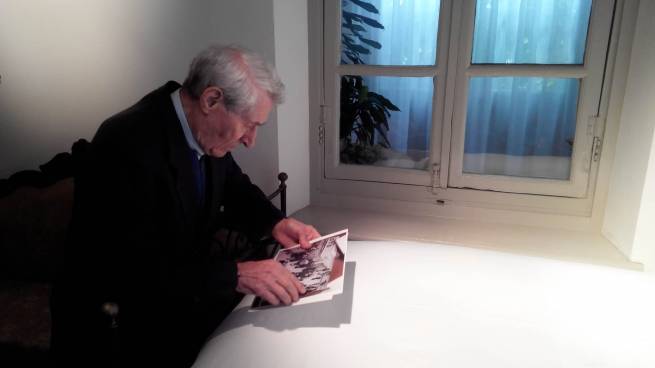 (ANS - Rome) – Bro. Renato Celato, 93, is a Salesian of the old guard. He was the ever reliable and discreet chauffeur of four Rector Majors. His was a long life of service, always observant and punctual to a heroic degree. And it was marked with a mysterious encounter!

How did you get to know the Salesians?

In 1934, the year of the canonization of Don Bosco, 1934, there was a lot of Salesian promotional material in circulation. There was one card in particular with a black and white image of Don Bosco. You had to focus on one spot for a few seconds and then, if you closed your eyes, you could see the smiling face of Don Bosco in colour. That's what intrigued me and attracted me. Seeing Don Bosco’s smile fascinated me. I spoke to the local priest and he arranged everything. In 1935 went to Colle Don Bosco, which was then called the Casa Paterna, and I stayed there as an aspirant. I went to the Novitiate in 1940. After First Profession I was sent to Crocetta to lend a hand to the sisters. Then I came back to Colle and I remained there until 1958. I was in charge of the fruit trees and bees. Towards the end of January 1958 I was called to Turin and the Economer General, Fr Fedele Giraudi, said to me: "We’re thinking of making you the Rector Major’s driver." I spoke to the Rector of Colle Don Bosco and on 29 January I had to pack my bags and go to Turin.

I was the youngest in Valdocco. When the Rector Major, Fr Ziggiotti, saw me he said: "Poor child, you have ended up in the lions' den! But don’t be afraid. If you have any difficulty come to me and we’ll solve everything."

I was to stay until 26 May 1971 when I came here to the Pisana in Rome. I had the same assignment - driver of the Rector Major. Later I was put in charge of the internal Post Office and I'm still here.

Among the many Salesians you knew, who impressed you the most?

How many Rector Majors did you know closely?

Don Ricaldone used to come almost every week to Colle. He followed the work for the start of the Graphic School personally and the site where the Temple of Don Bosco was to be built. At that time, there was just a hill with the farmhouse where Don Bosco was born. Before the house was demolished I slept for many years in the room where Don Bosco was born. Then there was Don Ziggiotti: I was his driver while he was Rector Major. Then Don Ricceri and Don Viganò and Don Vecchi. Don Chávez had his secretary as driver, so I started working full-time in the internal Post Office with the late Bro. Egidio Brojanigo who died two years ago at the age of 102. The biggest problem was with material to be dispatched. It was really challenging.

As the Rector Major’s driver I travelled a lot, always with the utmost discretion.

You heard a lot!

Too much! On long car trips, of course, the time was passed chatting. Problems were discussed and resolved. I heard, but I never failed to observe professional secrecy.

What do you remember of the mysterious dog that was seen beside the casket of Don Bosco?

I saw that mysterious dog and patted it! It was 5 or 6 May 1959, after the inauguration of the great temple in Cinecittà. We were returning from Rome with the casket of Don Bosco, whom Pope John XXIII had venerated. We left in the late afternoon. We were supposed to be in La Spezia by 4.00 a.m. but we stopped in Livorno and did not arrive until 7.00. The sacristan, Bro. Bodrato, had opened the doors of the church at 4.30.  He saw this dog crouching outside the door and got a rod to drive him away. The dog did not react but remained there to one side.

When we arrived, the casket was brought into the church and placed on a large table. The dog followed us in and lay down under the casket. When the people began to arrive and the function was about to begin, the Rector got worried and told the police: "Get rid of this beast!" but they could not. The dog gnashed his teeth and looked angry. He remained there until noon when they closed the church. The dog came out and began to wander around among the boys in the yard. The boys were naturally happy to have him in their midst. They patted him and pulled his tail. I did the same myself!

During lunch he came of his own accord into the room where we were having lunch with the community and just before the final prayer he opened the door again and went out alone.

At about 2.00 p.m. we went back to the Church to get ready to leave.  The dog was again crouching under the casket! How did he get in? The church had been locked as you would expect.

We loaded the heavy casket into the van and the dog was still there. I put a photograph documenting that incident in the archives. We set out again. Don Giraudi, who was in the car with me, kept saying every now and then: "Look and see if the dog is there!” And he was. He was always behind our van, even in the city. I saw him until we reached the third corner on the hill. Then he disappeared.

What would you like to say to the young Salesians and the many friends of Don Bosco today?

Be generous. Always say "yes", no matter what happens. In life there is always Someone to assist us. There is always Someone to guide us. We must have faith. I'm happy with my life because I always tried to say "yes" and to be useful to everyone, even if it cost me. First as a driver and then in charge of the post, day and night available to everyone, always ready for any service.

And may they meet many Salesians like Bro. Fortini along the way!