Ethiopia - Don Bosco and the peaceful life between Christians and Muslims 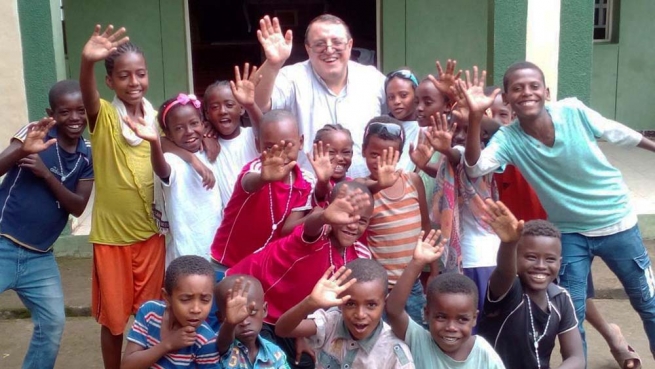 (ANS - Gambella) - In Ethiopia the Gambella region, on the border with South Sudan, is burdened by many problems - poverty, strong ethnic tensions, lack of industries and infrastructure - but not by the relationships between Christians and Muslims. "Here religion is not a reason for division. The cohabitation among the faithful is serene. I will say more: it is natural, in the sense that it is not the object of reflection: it simply happens. And we are very happy about it," says Fr Aristide Marcandalli, a 53-year-old Salesian priest, of which 25 lived in Ethiopia.

The Salesian has lived in five missions in different regions of the country: now he lives in Gambella, capital of the homonymous region: there are 350 thousand inhabitants, including 25 thousand Muslims. "We Salesian missionaries," Father Aristide continues, "are committed both to supporting and encouraging good ties between Christians and Muslims, and to fostering serene relations between different ethnic groups. The school plays an irreplaceable role in this work."

In Gambella Fr Marcandalli is parish priest of the cathedral and, together with two fellow brothers, he coordinates the Don Bosco Technical Institute, a vocational training center with 150 students, and another school that teaches 720 children and teenagers aged 7 to 17 years. The oratory, which also offers a very popular football school, over the years has become a reference point for over 1,500 young people.

"Both the boys and the teachers of the schools are Christians and Muslims and the relationships between them are excellent," the religious said, then added, "The Salesian educational system promotes integration, respect and acceptance of diversity and this contributes to building that peaceful coexistence between different ethnic groups which is a priority in Ethiopia. By studying, playing, playing sports together, children learn to love each other, to respect each other and discover that different ethnic backgrounds are a source of wealth. The entire Ethiopian Catholic Church is committed to this educational effort: specific programmes have also been launched, for example the one called 'Justice and Peace' which aims to promote justice and peace among young people."

The Salesians are also involved in the campaign against trafficking in human beings: "We work to stop illegal immigration explaining to young people the dangers they will face during their journey and the difficulties they will encounter once they arrive in Europe. And we try, through education, to offer quality training that allows them to find a job here."

At the same time, the spiritual Sons of Don Bosco, through their service in four refugee camps, give spiritual assistance and assure the formation of many poor people, above all to people fleeing the war, the hunger and the poverty of Southern Sudan.

Regarding the relations between Christians and Muslims in Ethiopia, even if in some areas "the peaceful coexistence between Christians and Muslims is a goal not yet fully achieved", as he explains, in many others it proceeds serenely. "For example, years ago we were called by a small Catholic community to open a mission in an area with a Muslim majority and it was precisely the Muslim authorities - knowing our needs - who offered us the land on which to build the chapel and our structures. I was very impressed with their availability."

Among the many Muslim friends of the Salesian there is also Nuriye Yesufed: aged 30, married, and father of a child, he works as a secretary at the Don Bosco Technical Institute, after having taught Computer Science there. There, he says, he has always been well and since he came as a student, he was welcomed "as one of the family". "I have never suffered any discrimination: no Muslim here has suffered any. I really like working with the Salesians because I share their mission: the integral education of young people, an education that offers them the indispensable tools to build a good life."