Guatemala - When a film inspires your life 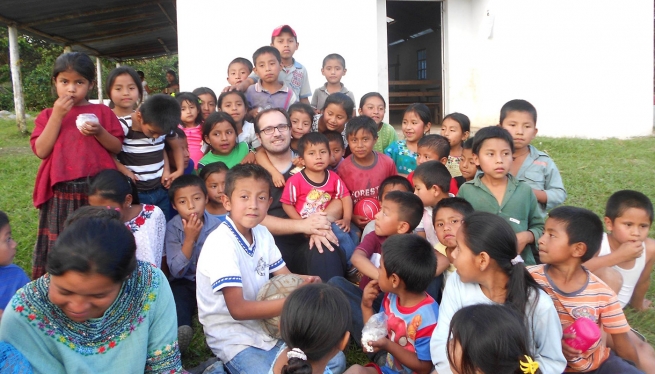 (ANS -San Pedro Carchá) – We talk to Fr Vittorio Castagna who "met" Don Bosco through a film and has been a Salesian missionary in Guatemala for eight years. "My first 'encounter' with the Salesian world I remember well. It happened in Washington through the images of the film Don Bosco, made by the director Leandro Castellani in 1988, on the occasion of the centenary of the saint's death. I was eight or nine years old: my father worked at the Italian Embassy in the United States of America ... ".

What happened after watching that movie?
"When I left the United States to return to Taranto, I had no small difficulty in adapting to a new life. My parents decided to send me to school with the Salesians. I was immediately captivated by their serenity and enthusiasm for conveying, not just via words, comity and education. And I began to ask myself more and more often: Why can't I follow in their footsteps? Why can't I become like them?"

And so, in 2010, you were ordained a Salesian priest ...
"It was the crowning achievement of a dream that I carried in my heart. But another desire, after listening to numerous testimonies of Salesian missionaries, was making its way into me: going on a mission. I was assigned to the department of Petén, in the north of the country. When I arrived in Guatemala, however, they asked me to temporarily stop in the district of Alta Vera Paz, inhabited by the indigenous people of the Q'eqchi, to replace a sick confrere. Eight years have passed since then ... ".

How was your first approach with the mission?
"Not very easy, starting with the difficulties related to language comprehension. The Q'eqchi are a very ancient indigenous population, descended from the Maya. Their culture is very open and has not made it difficult, over the centuries, to welcome elements of religions and traditions with which it has come into contact. Alongside traditional rituals, the Q'eqchi accepted some elements of Christian culture that gave rise to a process of evangelization that is developing within a strong religious syncretism."

What are the "special signs" of your mission?
"The parish in which I operate consists of a total of 250,000 inhabitants divided into 350 villages. In addition to evangelization, we are mainly engaged in education. Even if they do not possess great wealth, the Q'eqchi are a happy people. When they meet, they ask each other 'Is your heart happy?': a sign of the profound spirituality and the spirit of sharing that animates them."

What gift did sharing your life with them give you?
"First of all, the dimension of spiritual paternity. Living the mission helps me to progressively overcome the inner barriers and to share life with the Q'eqchi has represented, for me, a second human and spiritual conversion. After eight years at their side, I think I have learned to observe, to wait and to respect."