Ecuador - Exchanges teaching Math to studying Psychology, thanks to passion for working with youth: the "Chilean" 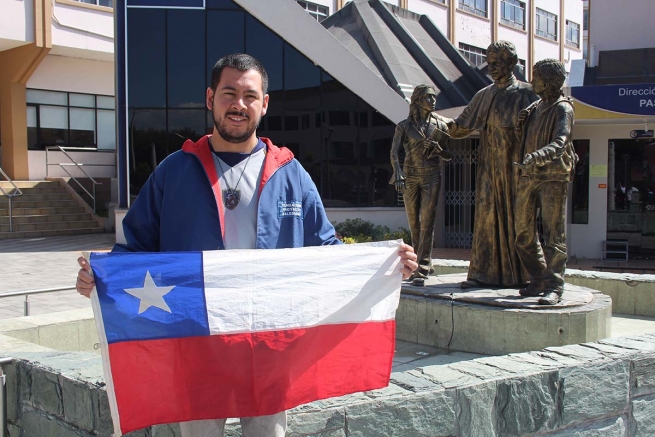 (ANS - Quito) - After serving for nine months as a volunteer missionary in the Salesian project "Chicos de la Calle", 26-year-old Gonzalo Peralta returned to his native country, Chile, with a decision: not to continue the post-graduate program in Mathematics he had in mind, but follow a Master's degree in Psychology in work with young people. This choice has materialized because of his recent experience with the children and young people of the Educational Unit of San Patricio (UESPA) and of the "Mi Caleta" reception center, based in Quito.

The "licen" or "Chilean", as Gonzalo was affectionately renamed by the young, has served as a professor of religion and mathematics, coordinator of the pastoral ministry of the "Don Rua" community and an oratory animator at the weekends. In each of these activities he applied a phrase that guided his actions: "the life of you young is the most precious good."

"The abandonment by parents suffered by the children of 'Mi Caleta' has marked my experience, because it is hard to believe that there is such a hard reality," says Gonzalo. One of the most cherished moments is sharing the meal in the evening because, after prayer, each of the boys tells him everything done during the day, just like a son with his father. In these conversations it sometimes emerged that the boys "knew they were wrong, but they were sure that at a certain point they would stop doing it. This was their greatest motivation, and that aroused much admiration in me."

The story that most struck him was that of a 12-year-old victim of physical, psychological and sexual abuse; his mother is a drug addict and his father died of drug abuse. But the boy never gave up and thanks to the reception of the Salesian Project and the work of volunteers like Gonzalo, he continues to study with success.

"One of the things that I carry in my heart," says Gonzalo, "is that a ball is enough to keep them entertained for the whole afternoon. They told me: 'Licen', with the ball we forget all the pains."

Gonzalo has it clearly in mind that returning to his country does not constitute the end of voluntary service or of his missionary life, because now his purpose is to contribute, with the knowledge acquired, to the work of the missionary animation team of the Salesian Province of Chile .

One of his dreams is to write a book with his testimony and encourage young people to carry on this experience. "Young people are called to continue the work dreamed of by Don Bosco."